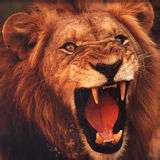 Do you know much about lions? I think they are beautiful creatures to look at…from a distance. The male lion with the huge mane around his face is a spectacular sight; however, I don’t think I would want to get close enough to pet one because while they are beautiful, they also can be intimidating, fierce and powerful.
In scripture, Jesus is referred to as the Lion of Judah [Revelation 5:5]. He is beautiful and captivating to look at; however, He is powerful and fiercely protects what belongs to Him. As His children, we can rest in that picture of Him. Joel 3:16 says “The LORD will roar from Zion and thunder from Jerusalem; the earth and the sky will tremble. But the LORD will be a refuge for His people, a stronghold for the people of Israel.” The only one who needs to fear the Lion of Judah is the enemy of the Lion.
Intrigued by the thought of Jesus as the Lion of Judah, I began to search the scriptures. Hosea 11:10 says, “They will follow the LORD; He will roar like a lion. When He roars, His children will come trembling from the west.” Can’t you picture a male lion calling his children to him so he could protect them and keep them safe and also warning, almost daring, his enemy to come near. I can also picture him teaching children to use their roar to ward off danger. They roar boldly with all they’ve got because they know their Daddy has their back.
I began researching the lion’s roar and was amazed by what I learned. Lions usually roar in the hours between dusk and early morning. Pause for a moment and think about the time of day the enemy gets to you most. Isn’t it in the night, when you feel alone and feel like you have no one to talk with about your fears? The Lord is roaring and calling you to safety. He is warning the enemy and telling him to back off. We, as His children, are to run to Him for safety. When the enemy comes knocking on your door at night, run to Jesus.
Lions roar to advertise their location and strength to rivals. Jesus lets us know where He is, if we will pause and listen we will know we are not alone. Not only is He letting us know He is with us, but He’s flexing His muscle to show the enemy if he messes with you, he has to go through Him first.
As we become more like Jesus, we learn to use our lion’s roar to tell the enemy to back off. We need not fear the enemy, because we know the Leader of our pack is bigger and stronger than anything the enemy can throw our way [1 John 4:4]. He’s right behind us, supporting us all the way.
Dear one, do not walk in fear any longer. Trust in the One who has the full authority to release the lion’s roar. He dwells in you; He will work through you, if you let Him; and He will make sure no one messes with you. He’s roaring…are you listening?
Dedicated in loving memory of Julia Roan, the woman who taught me to roar.
By Susan Norris|2012-11-30T17:00:28-05:00January 11th, 2010|Christ Follower|0 Comments