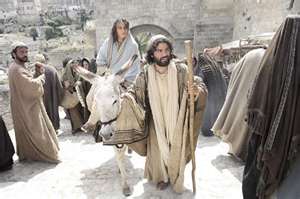 Have you been enjoying the Christmas story each morning in a different Bible translation? While I have one translation I am partial to when it comes to reading the Christmas story, I have found it to be very insightful to read the different translations because various things seem to stand out more in one translation than another.
In the New Living Translation Luke 2:5 reads “He took with him Mary, his fiancée, who was now obviously pregnant.” We all know Mary had to be far along in her pregnancy, because she gave birth in Bethlehem, but have you ever really paused and thought of the stigma of being engaged to be married and obviously pregnant. Unfortunately, in this day and time it isn’t unusual. In fact, in Hollywood it seems to be the rage. It just shows how far our world has gone from the ways of God.
Joseph, however, was quite possibly viewed as a fool for marrying a woman who appeared to have little regard for the sacred union of marriage. If not that, they thought he simply couldn’t wait until the end of the betrothal period. Either way, Joseph was not highly respected due to the situation. Yet, Joseph did not hang his head in shame. He quietly did what the Lord called him to do in spite of his circumstances, because he trusted God to work all things together for good [Romans 8:28].
Dropping down to verses 13-14 in the NLT we read “Suddenly, the angel was joined by a vast host of others—the armies of heaven—praising God and saying, ‘Glory to God in highest heaven, and peace on earth to those with whom God is pleased.’” I don’t know why it has never hit me like this, but the magnitude of angels described in this translation blows my mind. The picture I get is more angels than Turner Field could hold, surrounding them on all sides singing of the glory of God. No wonder the shepherds were terrified. The sheer volume alone had to be overwhelming. Then you factor in what they are seeing with their own eyes. I think it would have taken a while for anyone to move, let alone speak. Yet, the shepherds seemed to immediately respond and go and search for the Christ child.
Everyone who seems to have a part in the birth of Christ holds two things in common. They all seem to have complete trust in God alone and they all seem to respond immediately. Because of their faith and their obedience, they were chosen to participate in one of the greatest events in the history of the world. Their story is told all over the world and has been told in every generation since it took place.
Is God asking you to trust in Him in a situation you’re facing? Are you willing? Are you quick to obey Him when He tells you to do something? If not, you may be missing out on an opportunity to be a part of a major event in history.