Get rid of the trash! 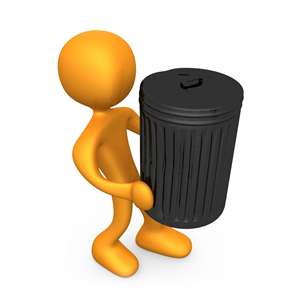 Do you have kids in school? Both of mine are in high school and their backpacks are insanely heavy. Apparently, no one uses a locker anymore in high school because there isn’t enough time between classes to get to your locker and get to class, so they carry all of their books around with them all day long. It is crazy.
The new semester began yesterday and they got their schedules, new supply lists and their textbooks. Now they have a whole new load of books to haul around. Could you imagine if they had to carry the books from last semester in addition to the books from this semester? It would slow them down. They would miss out on things because they arrived late due to the heavy load they had to carry with them. Eventually, they would be hunched over. Crazy, huh?
If it is so crazy, then why do we do the same thing in life? 2 Corinthians 5:17 says “Therefore, if anyone is in Christ, he is a new creation; the old has gone, the new has come!” It’s like a new semester. We get a do over, yet many of us still haul our old baggage around with us like last semester’s textbooks, weighing us down and causing us to miss out on so much in life. We are carrying a load that no longer belongs to us. When we accept Christ as our Lord and Savior, we are to give Him all of our junk, the Bible calls it our yoke, and we are to take on His [Matthew 11:28-30].
We were never intended to live life hunched over under the burden of a heavy load. John 1:12 says “Yet to all who received Him, to those who believed in His name, He gave the right to become children of God—” As children of the King of kings and Lord of lords, we are royalty [Revelation 19:16]. We are to walk with our heads held high, not hunched over, dragging a load of garbage behind us.
What are you waiting for? It’s time to take out the trash and step into your true identity.