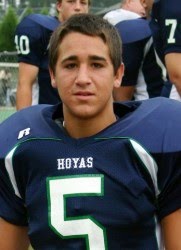 Have you known someone who passed away at a young age? It can rock you to the core, especially if it was senseless and avoidable. Last night I went out with the girls from my Bible study. We had a wonderful dinner and decided to go to the movies. We watched “The Fifth Quarter” which is based on the story of the Abbate family. The Abbate’s received the phone call every parent fears. They were having a nice dinner one minute and the next they were in the hospital pleading for their son’s life. When the answer they wanted didn’t come, they were left with heartache and questions.
I have to admit, it was hard to watch a movie based on a family living just miles from my house. I have driven down the road the accident took place on. My son plays lacrosse against the high school Luke Abbate attended. It came very close to home.
God is love. Bad things happen to good people. How do we reconcile those two things in our brain? It doesn’t seem right when people who are living life for God experience hardships while those who mock Him go unscathed.
We all experience hardship and difficulties in life; some seem harder than others. Jesus told us in John 16:33 we would experience difficulty. He also told us He has overcome the world. He is our hope in difficult times. When we can’t put one foot in front of another, He is our source of strength. Psalm 55:22 says “Cast your cares on the LORD and He will sustain you; He will never let the righteous fall.” When you have nothing left to hold onto, hold onto Jesus. He will never leave you nor forsake you [Deuteronomy 31:6, 8].
My daddy used to tell me “If you look hard enough, you can find something good in every situation that happens.” The Abbate story doesn’t end in the cemetery. It is a story of life. It is a story of hope. Romans 8:28 says “And we know that in all things God works for the good of those who love Him, who have been called according to His purpose.” God used one tragedy to bring about four victories. He used death to bring life. How did it happen? Well, I guess you’ll just have to see the movie to find out.