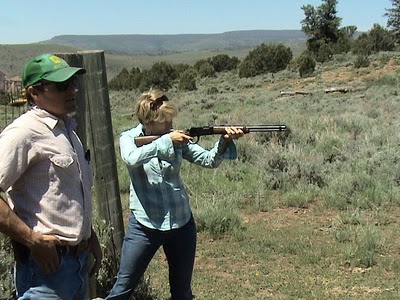 Have you ever shot a gun? I had never touched one until this past summer. I used to be scared to death of guns, but at the dude ranch they had a firing range. I shot everything they had and became more and more comfortable with guns.
A couple of years ago there was a string of break-ins in our subdivision. One of our neighbors had a newborn baby, so she was up a couple of times a night with the baby. One night when her husband was out of town she was up with the baby and heard someone coming in her house. She knew the intruder had no right to be there, so she took her husband’s shotgun and cocked it. The cocking of a shotgun is a universal sound for “GET OUT!” The man took off running through the house and out the dog door out of fear. She didn’t have to do a thing after cocking the shotgun. Just the mere sound caused the intruder to flee.
The enemy likes to intrude in our lives. In fact, he tries to make it a habit when possible. We, like my neighbor, have a universal sound that will send the enemy running. It’s the name of Jesus. The Pharisees were afraid of the name of Jesus and demanded the disciples stop doing things in His name [Acts 5:40]. Demons fear the name of Jesus and must respond to it [Acts 16:18]. Just like with a shotgun, you have to make sure you know how to use the name of Jesus or you can be harmed [Acts 19:13-16]. He lends His name and the power and authority that come with it to His children. Anyone else trying to use it will only get themselves hurt.
In James 4:7 we’re told “Resist the devil and he will flee from you.” The most powerful way to resist the devil is to proclaim the name of Jesus. The name of Jesus on your lips carries more power than a shotgun in your hands. Paul reminds us in Philippians 2:10 “that at the name of Jesus every knee should bow, in heaven and on earth and under the earth.” [Italics mine] There is no one and nothing as powerful as the name of Jesus.
Do you feel like there is an intruder in your life? It will only take one sound to cause him to run. Jesus! Jesus! Jesus! I can almost hear the intruder trying to escape out the dog door. There is power in the name of Jesus [John 17:11]. Don’t be afraid to use it!