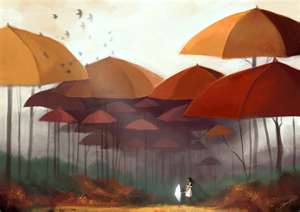 Have you ever felt like you needed to have a physical shield in your hand to ward off all that’s coming at you? We do have a shield available to us that is more real than what we can hold in our hand and it is Jesus [Psalm 7:10]. With the Lord as our shield, our enemies will cringe before us [Deuteronomy 33:29]. The thing about a shield is it only works when you take hold of it. When we take hold of Jesus and make Him our refuge, we are protected [Psalm 18:30].
Mark and I felt it was important to teach our children this concept early on in life. When Sam was six and Laura four we did an activity with them to explain it on their level. It was a huge success and is something that stuck with them (and us also). We took a bucket full of paper balls and an umbrella and called them into the kitchen. After sharing a teaching about God’s protection with them, we told them we wanted to demonstrate it. We took the paper balls and began throwing them at the children. We were pelting them left and right and they were rolling in laughter as they tried to fight them off without success. Next we gave them an umbrella and told them it was like God’s covering and as long as they stayed under it, they would be safe from attacks. They gathered close together under the umbrella and we began throwing the paper balls again, but we couldn’t hit them because they were covered. The paper balls bounced off of the umbrella instead. When we finished laughing and gathering the paper balls, we reminded them the importance of staying under the covering (i.e. the shield) of God.
Proverbs 30:5 says “Every word of God is flawless; He is a shield to those who take refuge in Him.” Do you feel like life is pelting you with one thing after another? Take some time to get behind the shield of God and let Him fight the battle for you [1 Thessalonians 5:24]. He is ready to be your knight in shining armor, and I have read He’s on a white horse [Revelation 19:11]. To quote a line from Princess Diaries, “Umbrella’s up!”
By Susan Norris|2012-11-30T17:00:10-05:00March 16th, 2011|Christ Follower|0 Comments