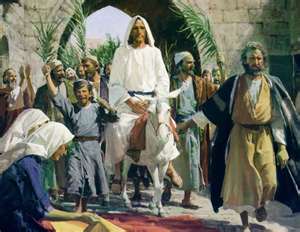 It is the beginning of Holy week. Have you ever paused to think about how the disciples and followers of Christ must have felt as they watched this week played out? They witnessed the deliverance of Jesus come in a very different way than anyone would have pictured. First, He is hailed as a king as He entered Jerusalem on a donkey before the Passover feast. The people were shouting “Blessed is He who comes in the name of the Lord” as they created a path for Him with their cloaks and palm branches [John 12:12-15].
As the week progressed, I’m sure they were expecting something big to happen, but not what they witnessed. As you read through Matthew 26 and 27 you see the Christ arrested, beaten, mocked, ridiculed, forced to carry His own cross and crucified as a common thief. For those watching, this is anything but a picture of deliverance; however, God’s deliverance almost always looks different than we expect.
Joseph’s brothers sold him into slavery; his master, Potiphar, threw him into prison after Potiphar’s wife falsely accused him; and he was forgotten by the chief cup bearer once the cup bearer was restored to his position [Genesis 37:28; Genesis 39:20; and Genesis 40:23]. While to the human eye, it appeared as Joseph couldn’t win for losing, the Lord was moving Joseph to the fulfillment of his dream [Genesis 37:7]. In Genesis 45:5-8 Joseph tells his brothers how they weren’t the ones who sent him to Egypt, rather it was the Lord. He saw the deliverance of God in the situations he experienced.
What are you going through right now? Does it look like anything but deliverance from your situation? Look for the positives, the little glimmers of hope that appear throughout your situation, and praise God for those. What appears to be defeat may be the Lord moving you to a place of victory. Remember, the deliverance of God often comes in disguise.