Take a stand and put action behind it! 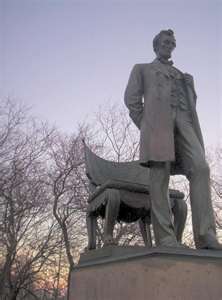 Would you stand up to say the right thing even if it wasn’t politically correct? What if it was counter cultural to everything being taught at the time? What if no one else was willing to stand with you?
God is looking for a few good men (and women) who care more about what He thinks about them than they care about what others think of them. Are you willing? Are you a wave maker, a history changer? He promises His full support [2 Chronicles 16:9]. If you’re looking for the endorsement of a big name, I don’t know how you can get any bigger than God, Creator of Heaven and Earth, the Alpha and the Omega. You may be the only one standing, but when you factor God into the equation you’ll see that 1 + God = a majority.
I remember the first year I was old enough to go to our youth group. We started with a worship song. “It only takes a spark to get a fire going….” It might not be a Top 40 worship song today, but the message is as relevant today as it was in 19….. One match can cause a raging inferno once it catches on. Are you willing to be the match? Realize a match brings fire when it experiences friction [The elementary science lesson was for free].
What are you willing to stand for today? The right to pray in a public place or for students to attend schools where bullying doesn’t take place? The possibilities are endless. What are you willing to put your voice to and stand for today?
We sing songs like History Maker by Delirious, but until we put action behind our words, they’re just words. Jesus said He loved us and then He put action to His words as He died on a cross [John 3:16; John 19:30]. Moses said “Let my people go.” And he continued to battle Pharaoh until he complied [Exodus 5:1, Exodus 12:31]. Abraham Lincoln took a stand against slavery until his last breath. Today Ashton Kutcher and Demi Moore are taking a stand against modern day slavery as they fight the battle against human sex trafficking of minors.
What do you want to see happen in your world today? Are you willing to take a stand for it? Will you put action behind it? God’s waiting for you to take a stand so He can stand with you. Actions speak louder than words.