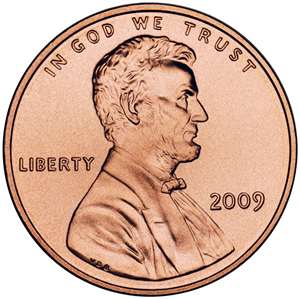 When was the last time you found a penny on the ground? Did you pick it up? When I see a penny on the ground I can’t help but think of the old saying “See a penny, pick it up and all day long you’ll have good luck.” I don’t really believe in luck, but I do pick up a penny when I see one on the ground. I think of them as God’s little reminders.
Our money has “In God We Trust” stamped on it, which seems a bit ironic based on the move in our nation to take God out of everything from our schools to our courtrooms. I, however, choose to embrace the declaration and actually say it out loud every time I find a coin on the ground. Recently, God has been throwing pennies in my path. In the past seven days, I’ve probably found a penny a day. When God puts a message in front of me multiple times, I pay attention.
In the past six hours I’ve had two telephone conversations with people who are facing the possibility of being unemployed in the days ahead. They’ve both experienced it before, and while they weren’t too excited about the prospect, they both declared “God took care of me last time; He’ll do the same again.” They’ve put their trust in Him.
Proverbs 3:5-6 says “Trust in the LORD with all your heart and lean not on your own understanding; in all your ways acknowledge Him, and He will make your paths straight.” The only action the Lord requires of us is to trust in Him, He will do the rest. He will take care of our every situation, if we will rest in Him [Psalm 62:5]. Throughout Scripture, the people of God only encountered trouble when they failed to trust in the Lord.
In Genesis 20, Abraham lied and said Sarah was his sister when he met King Abimelech instead of being honest and trusting God. His lies caused them to be forced from the land. Sarah didn’t trust in God for a baby. Instead, she gave Abraham Hagar to bear children, only to deal with strife as a result of her decision [Genesis 16 & 21]. Peter was able to walk on water as long as he trusted in the Lord, but the moment he focused on the storm he was in, he began to sink [Matthew 14:25-31].
I’ve heard it said “A crisis is only an opportunity riding a dangerous wind.” We all face storms. The outcome is determined by how we deal with them. Jesus has all power and authority [Matthew 28:18, Jude 1:25]. Even the storms we face are subject to Him [Mark 4:39]. Romans 8:31 asks “What, then, shall we say in response to this? If God is for us, who can be against us?”
I know people say it isn’t smart to put all your eggs in one basket, but if the basket is Jesus, then you’re safe. When you find yourself face to face with a storm, pull out a penny and remind yourself “In God We Trust!”