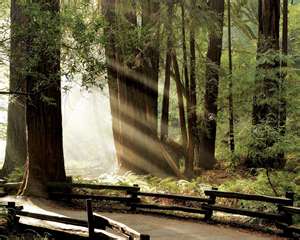 Have you ever seen the California redwoods? One of our stops on our vacation was to Muir Woods National Park. It is located just outside of San Francisco. We drove over the Golden Gate Bridge and just past Sausalito and found ourselves at the entrance of a National Park. The entrance to the park wasn’t awe inspiring, however, it was stunning. We looked small standing next to the redwoods, even my 6’ 4” tall husband.
There is one area where you’re asked to be quiet and take in the beauty of the forest. It was so peaceful and inviting. As we were exiting that area, a man approached us visibly excited. “Did you see that?” he asked. “Did you see that owl catch the squirrel?” Well, now he had my son intrigued. “That owl swooped down and grabbed a squirrel and now he’s up in that tree just sitting there. You can see the squirrel’s tail hanging down.” We found ourselves wrapped up in his excitement as we tried to follow his gaze up into the trees. Finally, we saw the owl. Fortunately for me, his back was turned to us, so we didn’t have to witness the demise of the squirrel, but we did see a tail dangling down below the owl. Almost as soon as we locked our gaze on the owl, he took off and he was gone. Our forestry guide exited almost as quickly and there we were standing by ourselves. I couldn’t help but laugh as I turned to my husband and said, “That man was so excited about what he discovered, and he just had to find someone to tell.”
I thought about what just happened for the remainder of the walk through the forest. The man’s excitement was contagious. He stirred a desire in us to see what we could just because of what he told us. I couldn’t help but think of Andrew running to get his brother, Simon, to tell him about finding Jesus [John 1:40-42]. Verse 41 says “The first thing Andrew did was to find his brother Simon and tell him, ‘We have found the Messiah’ (that is, the Christ).” Andrew was so caught up in his excitement about Jesus; he simply had to share it.
What about you? Have you been excited about Jesus lately? Have you been so caught up in His love, His goodness, His faithfulness, or His grace that you’ve had to share it? While our country no longer pursues Jesus as a nation, we are free to discuss Him. There are places we can meet that are totally devoted to Him. There are bookstores that sell products focused on Him and His teachings. While He isn’t on every corner, He is readily available and because of that, He has become ordinary, common place to many people. The excitement has worn off and in many cases He has become a habit instead of the King of kings and the Lord of lords [Revelation 19:16].
If the thought of sharing Jesus and what He’s done in your life lately doesn’t stir excitement inside of you, ask yourself why. What sits in His rightful place in your heart and mind? Other things can push Him out of place without us even realizing it. It happens to all of us from time to time. We must work at keeping Jesus in His rightful position in our lives. It doesn’t just happen.
Take some time today to talk with Jesus about where He stands in your life. If He isn’t where He needs to be, He’ll not only point it out to you, but He’ll help you get things back on track. You’ll know when the shift happens. You’ll suddenly have things about Jesus you just have to share with others. They’ll be too good to keep to yourself.