What will you wake up early for? 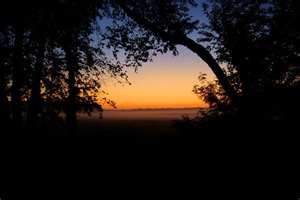 What will you wake up early for? A lot of people will wake up insanely early for Black Friday. They take their chairs and camp outside their favorite stores to be the first inside for the deal. Other people will wake up early for tickets to a concert or a sporting event. Some even go so far as to stay up all night in line to get the best seats in the house for an event. Many people will wake up early to go on vacation, whether it’s to catch an early flight or get an early start on their drive.
So why are we willing to wake up early for a sale, a concert, or a vacation, but we gripe and complain about waking up early for Jesus? The benefits seem to be the driving motivation for waking up early for other things. Do we not see a benefit in waking up early for Jesus?
Mark 1:35 says “Very early in the morning, while it was still dark, Jesus got up, left the house and went off to a solitary place, where He prayed.” Jesus didn’t just get up early, but He got up very early. It was still dark outside, which means it was sometime before 6 a.m. When was the last time you woke up before the sun came up for prayer? Jesus, the Son of God, felt it was necessary. He was one with God, yet He still saw the need to have uninterrupted, daily time with the Father [John 17:21]. He knew the benefit of waking early to meet with His Father. I wasn’t there when it happened, but I’m guessing He didn’t grumble about it or do it to check it off of His list.
Not only did Jesus wake up, but He removed Himself from possible interruption by leaving the house. Do you have a place in your house where you can be alone with God for uninterrupted prayer and study of the Word? We’ve all been in conversations where we’re constantly interrupted. It is hard to stay focused and keep your train of thought going. When we’re having an important conversation with another person, we set boundaries so we won’t be interrupted. It is important to do the same thing when we’re having a quiet time with Jesus.
I have to be honest with you, there are times I convince myself I need sleep more than anything, so instead of going to bed extra early, I will sleep in. When I do this, I have to rush to get ready and out the door. Either my quiet time is rushed or I skip it telling myself I’ll get to it later in the day, which rarely happens. I’ve learned that doesn’t work well for me. The days this happens aren’t my best days. I don’t operate from a place of peace. I tend to react to situations rather than respond to them. I don’t have a deep reservoir of the Lord to pull from because I didn’t sit still long enough for Him to pour deeply into me. To put it bluntly, those days stink!
I have personally experienced the benefit of waking up early to meet with Jesus and I want the golden nuggets I receive from Him. I want the ah-ha moments I have in the Word where I see something for the first time, even though I’ve read it a hundred times. I want to hear that still small voice in my spirit that directs me in a decision I’m facing. Those things don’t come from obligatory prayers or a quick read of a Scripture verse. Those things take time.
What do you want? What do you value? Are you willing to sacrifice sleep for it? In 2 Samuel 24:24 King David understood an offering to the Lord is meaningless without sacrifice. Giving up sleep to get up early for Jesus is a sacrifice. Is it one you’re willing to make?