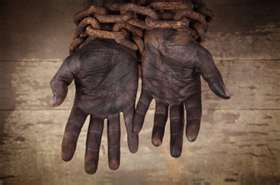 Do you remember studying slavery in school? The job description of a slave was pretty clear: Do whatever you’re asked without question. Do your job and disappear. Blend into the woodwork, so to speak. When your job is complete, you disappear until your next job.
A slave is given a place to sleep and food to eat, but it will not be in the main house. A slave doesn’t always remain with the same master; he or she can be sold, traded, or released. A slave’s quarters are removed from the master’s quarters, and they usually pale by comparison. I doubt any of us would sign up, willingly, for such a role.
A son or daughter, however, is completely different. A child dwells with the father where he dwells and eats from his table. The father provides for the needs of his children and protects them. He may ask a child to do a job here or there, but it is with him or for him. A father takes pride and pleasure in his children.
While a child by birth may or may not be the desire of a father, a child by adoption is chosen and intentional. You never hear the father of an adopted child refer to them as a surprise or an accident.
As Christians, we have been adopted into the family of God. He chose us. Ephesians 1:5 tells us “He predestined us to be adopted as His sons through Jesus Christ, in accordance with His pleasure and will–.” We weren’t an accident or a surprise. He sought us to bring us into His family. He desires to have us dwell with Him and He with us [Psalm 101:6].
In John 8:35 Jesus tells us “Now a slave has no permanent place in the family, but a son belongs to it forever.” John 1:12 says “Yet to all who received Him, to those who believed in His name, He gave the right to become children of God—“
We are His children and it is time we stopped living as slaves, who have no place with the Father, and start living as royalty. We need to embrace and walk out the words of Jake Hamilton’s song, the Anthem, “I am royalty! I have destiny! I have been set free and I’m going to shake history! I’m going to change the world!”