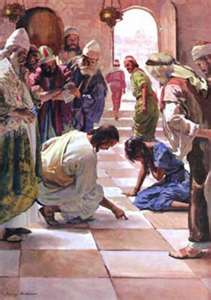 Do you like reality shows? They seem to be on just about every channel of the television. They tend to involve a competition of some sort with people judging one another. There’s American Idol, America’s Got Talent, So You Think You Can Dance, Survivor, The Bachelor, America’s Next Top Model and even Iron Chef. One person is always being compared to someone else and found worthy or not. People who audition for reality shows know they’re going to be judged and they are okay with it, but in real life people don’t liked to be judged by others.
Why is it we don’t have a problem with other people being judged; however, we don’t care for it ourselves. Matthew 7:1 says “Do not judge, or you too will be judged.”
One of the most familiar stories of judgment in the New Testament is found in John 8:1-11. A woman is caught in adultery and the leaders bring her before Jesus and ask Him if she should be stoned or not.
Can you imagine the shame the woman felt? If they caught her in the act of adultery, as the scriptures imply, she isn’t properly dressed, which is shameful enough; yet they parade her sin among a mass of people. How many of us would enjoy that experience? Jesus showed Himself to be a gentleman. His focus was cast down to the ground. He didn’t gawk or stare at her shame. He gave her dignity. When He did look up, she wasn’t the one He focused on or questioned. In verse seven He looks up and rocks the Pharisees’ world by stating “If any one of you is without sin, let him be the first to throw a stone at her,” then He returned His focus to the ground, giving them the ability to leave in dignity instead of shame.
It is so easy to become self-righteous and judgmental when we keep our focus on others as the Pharisees did. When we focus on ourselves, as Jesus forced the Pharisees to do, our perspective changes. We recognize we have no reason to condemn another. When we focus on Jesus, we extend love to one another.
Do you have any rocks you’ve been holding onto? It’s time to let them go and walk in the dignity Jesus affords you and remember He extends the same dignity to us all. Put your focus on Him and be a vessel of His love to those around you.