The Goal is to Protect the Goal! 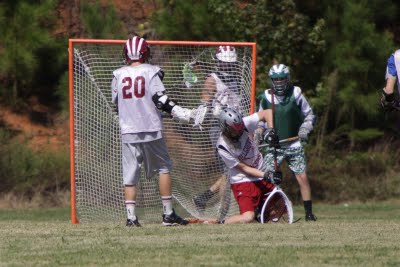 Have you ever watched a lacrosse game? Some say it is a cross between hockey and soccer. This is the fourth year my son, Sam, has played lacrosse for his high school, but it seems like twelve seasons instead of four, because they have a league that plays in the fall, the official season is the spring and then they have a summer league to keep in shape. After all of these seasons, I’m finally starting to understand the positions and rules a little.
Sam is the goalie for his team. It is his job to guard the goal and allow nothing inside. He has three defenders who assist him in this process. Their job is to protect the goalie and the goal as well, but the buck stops with Sam. There are plenty of times when the defenders take care of the opponents by intercepting the ball and sending it back to the other side of the field, but sometimes the opponents get past the defenders and then it is up to Sam to keep the ball from gaining access to the goal. He can stop is by blocking the ball, causing it to bounce off of him or his stick or he can catch the ball and send it far, far away. When he catches it and throws it away, it is called a clear.
As I sat at his game this weekend, I saw this game in a whole new light. It was a picture of what we are to do with thoughts and ideas that come our way. We have a lot of information thrown in our direction throughout a given day. Some of it is useful and some of it is harmful and can lead to corruption and some of it cases us to worry unnecessarily. 2 Corinthians 10:5 says “We demolish arguments and every pretension that sets itself up against the knowledge of God, and we take captive every thought to make it obedient to Christ.”
There are many ways we can do this. Think of the goal of a lacrosse game as your mind. Our defenders protect the mind by keeping the thought from coming close to our mind. We do this by choosing wisely what we expose our mind to on a daily basis. What are you reading? What are you watching? What are you listening to? When you choose to expose yourself to things that aren’t contradictory to the Word of God, you are defending the mind. Philippians 4:8 says “Finally, brethren, whatever is true, whatever is honorable, whatever is right, whatever is pure, whatever is lovely, whatever is of good repute, if there is any excellence and if anything worthy of praise, let your mind dwell on these things.” By applying this verse to our lives we allow the defenders to do their job and protect the mind from corruption.
Sometimes; however, a thought will slip by the defenders and threaten the mind. At that point, we need to deflect it or catch it and throw it far, far away. We deflect it by averting our eyes and placing our focus on God. Jesus did this in the fourth chapter of Matthew when the devil kept trying to twist scripture to serve his purposes. Jesus used scripture to stand true and deflect the lies of the enemy. When we catch it and throw it away, we take it to Christ and ask Him to remove it from our minds, as far as the east is from the west, so we will not stumble into sin. We “clear” our minds. We’re promised in 1 Corinthians 10:13 Jesus will provide a way out for us when sin comes knocking at our door.
Just like Sam has to practice his stick skills to keep himself sharp for a game, we have to practice our skills as well. We do this by spending time in the Word and with the Lord. Then when the corrupt or worrisome thoughts come our way, we are quick to act keeping bad thoughts from entering our mind and taking root. The goal is to always protect our mind so nothing gets in scoring a point for the enemy.