Are you tired of sitting in pig slop? 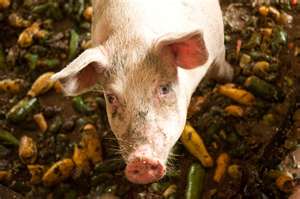 Are you familiar with the parable of the prodigal son? It can be found in Lik1 15:11-32. A man had two sons and the youngest son wanted his share of the estate. He took his money and left home, squandering it away on wild living [vs. 13]. He wound up hiring himself to feed someone’s pigs because he had to earn money to eat. Keep in mind, Jews thought pigs were the lowest of low, so this wasn’t just a farming job he was doing.
Can you imagine? You used to live in a nice house, with servants, where you wanted for nothing and now you’re envying pigs because they have food to eat. Whenever slop starts looking good to us, we know we’re in a bad way.
Verse twelve says “When he came to his senses, he said, ‘How many of my father’s hired men have food to spare, and here I am starving to death!’” He recognized how even the servants had it good in his father’s house and he longed to return.
The son had a change of heart, a turning so to speak. In verses eighteen and nineteen he recognized his sin and was determined to return home and hire himself out to his father. Now that is a humble and broken heart.
While the son is gone, the father is desperate for him to return and waits for him day after day, wondering if he’ll see his son again. Can you picture this father looking down the long driveway each day, longing for his son’s return? He just wants another glance of him, a chance to throw his arms around his son and tell him that he loves him. The father’s heart is for his son, yet he can’t restore the son until the son chooses to return. The son has to return to activate the process.
The same is true of us. The Father is ready to restore us, but we must return to Him to activate the process. If your life feels like you’re living on a pig farm, you have to ask yourself “What went wrong? When did I step out of the Father’s plan for my life and start living my own plan?”
The Father has great plans for your life; however, we have to embrace His plans and His way of life to live out those plans [Jeremiah 29:11]. We can’t do things our own way and then when the wheels fall of the bus ask God where He is. He isn’t the one who moved?
In order to live the life with the hope and future God promises, we have to stay on His path without taking detours. If we do take a detour, we can’t just complain about how it stinks and expect God to step in and fix it. That’s like one kindergarten child slapping another and then saying “Sorry!” when he gets placed in time out, only to slap another child the minute he gets out of time out. Sorry isn’t repentance and it won’t trigger God’s activity in a situation. God requires a repentant heart, a turning from our ways to God’s ways.
2 Chronicles 7:14 says “if my people, who are called by my name, will humble themselves and pray and seek my face and turn from their wicked ways, then will I hear from heaven and will forgive their sin and will heal their land.”
If you find yourself sitting in slop, it’s time to turn to the Father and all He has for you. He will not force Himself upon you. You have to release Him to work in your life. The change is up to you. So I ask yourself, are you tired of sitting in pig slop? Then go home, because your Father is waiting for you.