Let go of it, Linus! 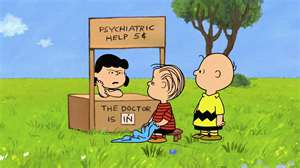 How many of you grew up watching and reading the Peanuts cartoons? If you’re familiar with them, one thought comes to mind when I say the name Linus…his blanket. He always had his blanket with him. I don’t think I’ve ever seen an episode or cartoon when he wasn’t dragging his blanket around, collecting dust wherever he went. It’s referred to as his security blanket in some episodes, and Linus refuses to part with it.
Many of us carry our worries, cares, and problems around with us like Linus does his blanket. We drag them behind us, weighting us down. As we drag them through life, they collect more filth, thus weighing us down even more. Like Linus, many of us find security in what we carry. We like to complain about them and say we wish they would go away, yet as one woman put it when confronted: “I hate it, but at least I know what to expect.” We find some sort of odd comfort in dragging our problems, worries and concerns around with us.
God never intended for us to live life this way. He tells us in John 10:10 that He came to give us “abundant life”; some translations say “life to the full.” Abundant life or full life doesn’t include hauling along a pile of worries with us everywhere we go. Jesus died on the cross to take all of those with Him [Isaiah 53:5]. When we carry our burdens around with us giving them the ability to impact our lives, we are negating all Jesus did on the cross. Psalm 55:22 says “Cast your cares on the LORD and He will sustain you; He will never let the righteous fall.” 1 Peter 5:7 says “Cast all your anxiety on him because He cares for you.” He cares and He has gone to great lengths to demonstrate His love for us [John 3:16, Romans 5:8].
In Matthew 11:28-30 Jesus recognizes we’ve got a heavy load. He offers to trade it for His load, telling us “”For My yoke is easy, and My load is light.” So what are we waiting for? We have the opportunity to trade our heavy load with the Creator of heaven and earth for a lighter load. I don’t know about you, but I’m pretty certain anything I’m carrying is no match for God. He can handle it and He’ll do a much better job with it than I will. Only He can take junk and cleanse it making it whiter than snow [Psalm 51:7]. It’s time we trade in our filthy blankets in exchange for what the Lord has for us. Are you willing? I promise He has something better for you.