What we have is an opportunity! 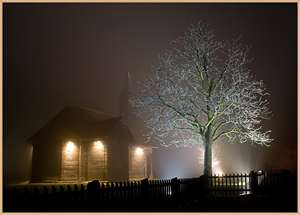 Don’t you hate it when things go wrong? You pour yourself into something and then the wheels fall off the bus? Do you get frustrated when this happens? In college I worked with a guy named Guy. When problems would arise causing others to get frustrated, he would reply “We don’t have a problem here, what we have is an opportunity!” He was a little quirky but his positive outlook on things caught on and defused bad situations and caused people to look for positive outcomes instead of give up hope.
In January of 1819, an organ repairman traveled to St. Nicholas Church in Oberndorf to repair the church organ. While he was there, the priest and the organist taught him a song they had recently written. The organ broke just before Christmas. How could they celebrate Christmas without music? In an attempt to have some type of music for the church to enjoy for Christmas, these men wrote eighteen short and simple lines and set them to music for two voices, the choir and the guitar. This is how the most popular Christmas carol of all time, Silent Night, came to be. If the organ had been repaired prior to Christmas, one of the world’s favorite carols of the season may not have been written and sung for almost two hundred years.
Romans 8:28 says “And we know that in all things God works for the good of those who love Him, who have been called according to His purpose.” What appears to be a problem in your life right now? Are you willing to place it in the hands of God to see what He does with it? When you do, it is no longer a problem, but an opportunity.