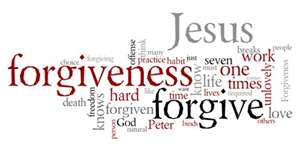 Have you ever heard the phrase “Fool me once, shame on you; fool me twice, shame on me”? As a culture, we aren’t very forgiving people. We tend to forgive someone the first time around, but after that if they fail us again, we’re over it. We get the attitude of entitlement and the “you will NOT do that to me” and as one friend says “the gloves come off.”
Luke 17:3 says we’re to forgive those who repent. We’re not to keep score or hold grudges or smack them around, even if we think they deserve it. We are to forgive, period.
I love Peter. He is so impulsive and expressive, but he really does want to follow Jesus and be a good witness for Him. In fact, Peter wanted to make certain he had this forgiveness thing down, so he came right out and asked Jesus “Lord, how many times shall I forgive my brother when he sins against me? Up to seven times?” [Matthew 18:21]. Peter wanted to know he was walking the line and doing what Jesus expected of him. He thought he was being rather generous when he offered to forgive his brother seven times. Can you imagine the look on Peter’s face when Jesus replied to him? “Jesus answered, ‘I tell you, not seven times, but seventy-seven times.’” The King James translation says “Until seventy times seven.” That is four hundred ninety times. Jesus isn’t telling Peter to pull out a tablet and put a tick mark each time someone offends him until he reaches four hundred and ninety times and then be done with them. He is telling Peter, and us, to continuously forgive.
Over and over and over throughout Scripture we read of the forgiveness of God. Even as Christ as being crucified on a cross and mocked before men He said “Father, forgive them, for they do not know what they are doing.” [Luke 23:34].
When Jesus was asked to teach the disciples to pray, He taught them to say “Forgive us our debts, as we also have forgiven our debtors” [Matthew 6:12]. Luke recorded it in Luke 11:4 as “Forgive us our sins, for we also forgive everyone who sins against us.” We are basically saying to God “Use the same standard of forgiveness with me that I use with others.”
Fortunately for us, there is no limit to the forgiveness of the Lord. Psalm 103:12 tells us “as far as the east is from the west, so far has He removed our transgressions from us.” As God’s children, we are to forgive as He forgives, which is completely, keeping no record of wrongs [Ephesians 5:1-2].
Is there someone in your life you need to forgive today? Could it be yourself? There’s no greater time to throw away the record book than today.