The Lord is with you! 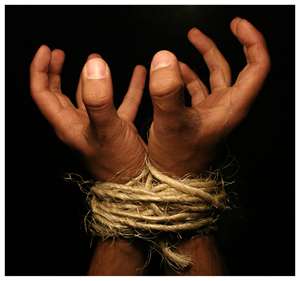 Did you realize there are more slaves in the world today than in any other time in history? It’s crazy to imagine people in our society are sold into slavery on a daily basis. I’ve been attending the Georgia Board of Education Conference on Human Sex Trafficking in Atlanta this week. They are bringing in experts in the field to educate the educators on what to look for and how to prevent students from becoming victims of slavery. Many times the girls are lured away or taken, but there are cases when family members sell their daughters into the slave trade.
Joseph knew something about that. His brothers had about all they could stand of him and they wanted to get rid of him. They didn’t want his blood on their hands, so they decided to sell him into slavery. He was taken to Egypt and sold to Potiphar as a slave [Genesis 39:1-4]. What Joseph’s brothers meant for evil, the Lord worked for good, even when it didn’t appear so [Romans 8:28]. Even though Joseph was put into slavery, we’re told “the Lord was with him” [vs. 2].
Later Joseph is tempted by Potiphar’s wife to sleep with her, but he takes the high road and flees [1 Corinthians 10:13]. Joseph’s honorable actions landed him in prison, but verse 21 tells us “the Lord was with him; He showed him kindness and granted him favor.”
Many times when we go through hardship, we only see the hardship. We look at the difficulty we’re facing and fail to see the Lord is with us. We fail to see how He uses the situation to strengthen our faith, build our endurance, and cause us to fully rely on Him. James 1:2-4 tells us “Consider it pure joy, my brothers, whenever you face trials of many kinds, because you know that the testing of your faith develops perseverance. Perseverance must finish its work so that you may be mature and complete, not lacking anything.” We don’t celebrate the hardship, but we do celebrate the Lord and His presence with us during the hardship and the knowledge that He will see us through to the other side [Psalm 23:4].
Are you facing a difficulty today? Maybe you’ve just been given a bad diagnosis or lost a job. You might be going through a difficult time with a loved one. No matter what you’re facing, the Lord is with you and He can use it for good if you’ll allow Him. Just like Joseph, your hardship could be preparation for a great assignment coming your way. He has promised He will never leave you nor forsake you [Deuteronomy 31:6,8]. No matter what you’re facing today, look for Him. He is with you.