Is it time for a bath? 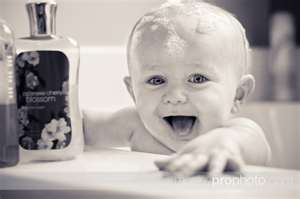 Did you like taking a bath as a child? For some reason, little boys in particular tend to hate taking a bath. I don’t think it’s that they have an aversion to being clean as much as they don’t want to slow down long enough to take the time to do it.
When my son was in fourth grade his class had an overnight fieldtrip to Savannah, Georgia and I chaperoned. I was assigned my son and three of his friends. After a day of seining in the ocean and hiking around the various squares of Savannah in the hot sun, we finally made it to our hotel rooms. I told the boys to take a shower, but to make it quick because there were five of us who needed to shower. The first boy was in the bathroom mere minutes before he came out in his PJs smelling just as stinky as he had before he went inside to bathe. I felt confident he hadn’t showered so I questioned why his hair was so dry. He replied, “I just dried it off really well with the towel.” Upon further investigation I discovered the soap hadn’t been opened nor had a towel been unfolded. I immediately sent him back into the bathroom and told him he had to stay in there at least five minutes and he better smell different when he came out next time.
John DiLemme must not have been around little boys when he said, “Everyone takes a shower to get rid of the dirt on their physical bodies.” However, he was quite wise when added, “So, doesn’t it only make sense to clean your mind from all the negative garbage from the outside world?” We live in a fallen world and a lot of what we’re exposed to is a reflection of the world we live in. Garbage in equals garbage out. So, what are we to do? How do we follow DiLemme’s wisdom and cleanse our minds of the garbage?
In Romans 12:2 Paul challenges us by saying, “Do not conform any longer to the pattern of this world, but be transformed by the renewing of your mind. Then you will be able to test and approve what God’s will is– His good, pleasing and perfect will.” How do we renew our minds? We refuse to meditate on things that are garbage and instead choose to focus on things that are healthy and helpful. Philippians 4:8 says, “Finally, brothers, whatever is true, whatever is noble, whatever is right, whatever is pure, whatever is lovely, whatever is admirable– if anything is excellent or praiseworthy– think about such things.”
We cannot control the thoughts that enter our mind; however, we can control what we do with those thoughts. If they are positive, uplifting and edifying, we can embrace them, form agreements with them and focus our attention on them as Paul encouraged the Philippians. However, if they are dark, damaging or hurtful, we can accurately assume where they came from and resist them so they’ll go away [John 10:10, James 4:7]. We’re encouraged in Deuteronomy 6:1-9 not only to focus our attention on the Word of God and meditate on it day and night, but we’re to pass it on to our children and teach them to do the same. In focusing on God’s Word, we will quickly be able to discern anything that contradicts it and cast it aside as the garbage it is.
The best way to keep your physical body clean is to bathe regularly and the same is true about your mind. Are you in need of a mental shower? If so, come to the One who can make you whiter than snow [Psalm 51:7].