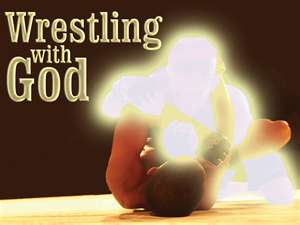 Do you have a brother? I can now say I was blessed to grow up with two. There were times when I’m certain the word blessed wouldn’t have made it in that sentence; however, that was at least thirty-five years ago (I know you’re wondering how that’s possible since I’m only 29).
Both of my brothers have peppered my life with hilarious stories through the years. One of my all-time favorite stories of my older, David, is when he was four years old and got into a fight at church. When daddy picked him up from Sunday school David’s tie was sideways and his shirt was untucked. To say the least, he was a mess. Daddy asked him what he did in Sunday school. David beamed up at daddy with pride in himself and said, “I been fighting Daddy. Have you been fighting?” I guess he thought that’s what everyone did when they came to church.
We laugh at that story as we picture a four year old with his wardrobe all askew, but in reality, we all fight with God from time to time. Oh, some of us don’t do so at church, we save our battles for the privacy of our own homes. Our battle usually begins when God wants us to do something we either don’t want to do or if we do want to do it, we’re fearful of taking the first step. Am I stepping on anyone’s toes here?
We aren’t the first to wrestle with God and we certainly won’t be the last. In Genesis 32:22-32 we see Jacob’s fourth encounter with God, his wrestling match. The first time he encountered God was when he made his journey to his uncle’s home [Genesis 28]. God spoke his destiny to him. Jacob’s second and third encounter with God can be found in Genesis 31. God called Jacob to return to his family and then spoke to him in a dream about His provision for Jacob. All in all, his encounters with God had been positive; however, his fourth encounter brought on a fight.
The thing about wrestling with God is you can’t ever win against Him; yet, when you lose, you win. Think about that for a minute. God has perfect plans for your life [Jeremiah 29:11; John 10:10]. He knows everything about you [Matthew 10:30]. His thoughts concerning you are precious and vast in number [Psalm 139:17-18]. He loved you enough to die for you [John 3:16]. Whatever it is He desires for you, you can trust. He is trustworthy [2 Samuel 7:28]. Deuteronomy 31:8 reminds us, “The LORD Himself goes before you and will be with you; He will never leave you nor forsake you. Do not be afraid; do not be discouraged.” With that kind of promise, why would you even begin to fight Him?
Rest in Him [Deuteronomy 33:12]. He’s got you. The easiest way to win is to lay back in total surrender and watch Him work. When it comes to winning, He’s the Master! He has an unbeatable record. In trusting Him, you’ll be blessed. It’s time to go down for the count and see what He does on your behalf. What’s stopping you?