Truth….how do you define it? 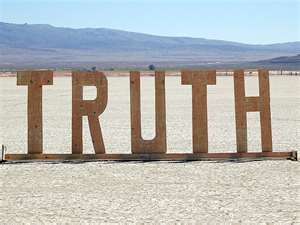 What is truth?  Today in our culture, people want to present truth as something subjective.  Basically, what is truth for you may not be truth to me.
Truth is defined as the “actual state of matter; conformity with fact or reality; verity; verified or indisputable fact, proposition, principle or the like.”  Jesus said, ““I am the way and the truth and the life. No one comes to the Father except through Me” [John 14:6].
Jesus is indisputable no matter how hard people try to dispute His existence or deity.  In Romans 9:1 Paul says, “I am telling the truth in Christ, I am not lying, my conscience bearing me witness in the Holy Spirit.”  The truth he spoke of was Jesus.  Charles Sineath puts it this way, “God said it; I believe it; that settles it!”
In his book, Radical, David Platt tells the story of meeting a Hindu and a Muslim.  They were discussing how to get to God.  One of the men stated all three of them were truly similar in their beliefs because they all saw God at the top of a mountain, they only took different paths to get to Him.  David compassionately clarified his position.  He didn’t believe he was to take a path up the mountain to God; rather he believed God took the path down from the mountain to him. It may have seemed to be a minor difference of opinion but it is a critical difference.
Many of us freeze when we encounter someone who believes differently than us.  We don’t know what to say.  We’re afraid we might get stuck in a debate and not know what to do.  After all, we haven’t all been to seminary.  We can’t all quote the Bible, chapter and verse.  1 Peter 3:15 challenges us all to, “set apart Christ as Lord. Always be prepared to give an answer to everyone who asks you to give the reason for the hope that you have. But do this with gentleness and respect.”  We’re promised in Mark 13:11 the Holy Spirit will give us what to say at the time, “for it is not you speaking, but the Holy Spirit.”  All that’s required from you is a willingness to take a risk.
Truth is truth.  Our belief or disbelief in it does not negate it from being truth.  Jesus is the Truth, plain and simple.  Anything that isn’t Jesus is a false god and Yahweh was very clear about His position on other gods [Exodus 20:3].  He was also very clear about our position in Acts 1:8, “you will be my witnesses in Jerusalem, and in all Judea and Samaria, and to the ends of the earth.”
It’s time we fulfilled our destiny.  It’s time we take a stand for Jesus. The next time you encounter someone who believes differently than you, will you shriek back, intimidated or afraid to speak?  Will you open mouth to speak the Truth in love?  If you love Jesus, there really isn’t a choice to make; there’s just action to take.
By Susan Norris|2012-12-04T15:53:57-05:00May 16th, 2012|Christ Follower|0 Comments