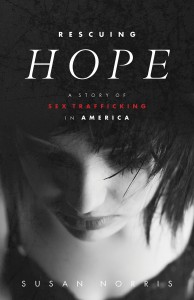 Have you ever thought about writing a book? I can honestly say, I hadn’t given it much thought before Rescuing Hope.  When I learned of the evil stripping innocence away from our children, selling them like a commodity, I had to do something. Because of my work with youth, I knew teenagers would never read a nonfiction book on the issue of sex trafficking, not unless they were doing a paper on the subject. I also knew if I could write a compelling novel and fill it with as much information about the issue as possible, there was a chance they wouldn’t just read it, but it could become a catalyst for conversation among their peers. I also knew parents, youth workers, coaches and anyone else that works with teens needed to learn what they could about the issue. It is for that reason that I set out to write Rescuing Hope.

There’s nothing conventional about this book, especially how it was written.  I spent six months interviewing survivors, families of victims, detectives, organizations that fight the issue, former drug users and sellers, and I even had the opportunity to sit down with a former pimp.  I read every article I could find on the issue and watched documentaries as I learned about them. I wanted to learn as much as I could from as many angles as I could.  Once I had all the information I could gather, I went to the Lord in prayer, asking Him one simple question,

I had never written a book. I had no clue where to begin.  God had given me the song, Restoration, by David Brymer and Clay Edwards for the book. I wasn’t even sure how I would work it into the story, but I knew it would be part of it.  Each morning, after my family left for the day, I would put the song on and go face down before the Lord asking him to show me what happened to Hope that day.  As I lay there, He would pass a scene before my mind’s eye and I then I would type what I had seen. This went on for over nine months.

When I finished, I knew I needed someone to read it and tell me if I was any good or if I needed to throw it away and start over.  I had twelve readers review it for me.  The readers were other writers, heads of organizations fighting the issue, detectives, and those who were avid readers.  I took their feedback, made corrections and sent it out again.  After going through that process several times, I had it professionally edited twice before my agent read through it. After my agent approved it, we had it proofread by multiple proofreaders, then, and only then, did it go to the publisher.  Rescuing Hope was touched by more hands than I can count to bring you the final book.  It took an army to get her where she needed to be.

The same can be said for survivors of human sex trafficking. They’ve had so much happen to them that has damaged their bodies, their minds and their spirits.

It takes an army of people to help them put their lives back together and start a movement against this evil.

What will you do today to take a step in helping a young girl reclaim her life and find freedom.  What will you bring to the Lord as an offering for Him to use in this process? So many people ask “Why does the Lord allow this to happen?” It breaks His heart.  He is for these girls. He is love [1 John 4:8]. He’s put a plan into action to help them, rescue them and restore them.  That plan is us.

By this all men will know that you are My disciples, if you love one another.”

We need to stop asking God why He’s allowing this to happen and realize He’s asking us the same question.  These girls need us.  They’re counting on us.  He’s counting on us.  What will you do?