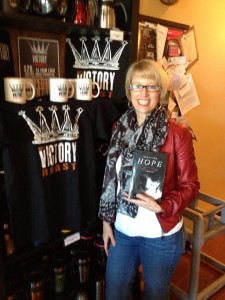 Are you as excited as I am? After two and a half years I can finally share Rescuing Hope with you. I have often equated this process to Mr. Toad’s Wild Ride. There have been ups, downs, and crazy turns, but it has all been worth it.  I am sharing chapter one with you today.  Tomorrow, you will be able to purchase the book at the Resolution Hope New Year’s Eve event in Pittsburgh, PA or Kennesaw, GA, right here or on Amazon.com.

Be forewarned this is real life fiction. It’s gritty. Some of the content is mature, and though I have strived  for a PG-13 treatment of it, this book should be read with adult supervision.

Rescuing Hope is dedicated to the survivors of human sex trafficking, their families, the detectives who rescued them, and the organizations on the front lines who trusted me with their stories.  Hope’s story is a mixture of your stories.  You are my heroes.  You’re strong and fearless.

“I need my money.” She pulled her tank top back on in the dimly lit room. The scent of their act still hung in the air. She gagged on her shame. Most days she could go through the motions like a robot. But tonight she saw a price tag hanging on her that read “clearance, damaged goods.”

“You’re nothing,” he said. It was like he took a chunk out of her already pulpy soul. The low-watt bulb dangling from the crumbling ceiling was a spotlight that revealed her.

“Pay you! You’ve got to be kidding me. You weren’t worth the time I spent away from my family.” He threw her jeans in her face. “Get dressed and get out, you little tramp.”

“I can’t go back to T without my money.” Her voice cracked and rose. She knew T wouldn’t take it lightly. “He’ll kill me. Then he’ll come kill you too.”

“I really don’t care what he does with you. I’m going to get cleaned up and then I’m out of here. Make sure you’re gone when I come out.”

The bathroom door closed with a bang. She slid her jeans over her bony hips; she’d always been thin, but this life made her gaunt. Then she saw his wallet on the dresser. She’d pay herself. He wouldn’t know until she was long gone. She picked up the wallet and counted out what he owed her just as the water turned off. She put the wallet back exactly where she’d found it, grabbed her shoes and opened the door to leave.

His hand reached over her head and slammed the door shut. His face twisted with rage.

“You little thief!” He grabbed her hands, forcing them open. The money spilled out onto the floor as the color drained from her face.

He threw her up against the wall. His fists crushed into her chin; sour blood slid over her tongue. Stars exploded before her eyes when he grabbed her hair and tossed her to the floor. He unleashed his rage on her, his strength and bulk enfeebling her attempt at fighting back. He wasted her, again. She lay curled on the floor for moments, listening while his breathing slowed. The door opened and signaled the end of his tirade.

“Now get out before I throw you out.”

With her last bit of energy, she crawled out the door on her hands and knees. He locked it behind her. She pushed her body into a sitting position and dug in her pocket for something to wipe the blood dripping down her chin. How had this happened? She’d forgotten T’s number-one rule: payment before pleasure. She would have to face T’s wrath when she showed up without the money, and because bruised doesn’t sell. She was stuck. She couldn’t turn a trick looking like she did. Her best bet was to get back to the apartment and face what was coming to her.

She made it back to the building but had difficulty finding number twenty-two on the elevator buttons. Her right eye was swollen shut. As the elevator rose, so did her heartbeat. What would T do to her? She knew he wouldn’t offer her an ice pack. She began to shiver, even though the elevator was warm.

When she walked in the door, he was talking. On the phone? A girl stood in the doorway to the kitchen, trying to convince him to keep her there instead of sending her out for a job. Hope snuck to the bathroom, she didn’t dare turn on the light. A pounding drum had taken up residence in her head. She managed to turn on the water and get undressed. She anticipated relief, but tiny needles penetrated her skin instead. She got out of the bathtub fast, then pulled on sweats she found on the floor.

She’d given up looking at herself in mirrors, except when she applied the heavy makeup T demanded she wear, night after night. Her haircut and color weren’t the only changes since she met T. She was dead inside. All that remained was a shell.

Back in the living room, T stood alone, still on the phone. The girl was gone, probably off to collect what mattered most to him . . . money. T would sell his own mother if the price were right.

She walked out on the balcony for a smoke while T was distracted. Cigarettes were just one of the many coping mechanisms she’d acquired. Her hand trembled as she lifted the cigarette to her lips. Her heartbeat sounded like a jackhammer in her own ears. T would be beyond furious.

As she flicked her cigarette over the balcony, she shivered, sensing T behind her. Answer time. She turned. His jaw dropped.

“What the hell happened to you?”

She knew better than to pull away from him, but his volume sent her head spinning.

“I asked the guy to pay me, but he said I was going to pay. He left his calling card on my face.” Her legs were shaking so hard, she didn’t know if they would hold her up. T got violent when people ripped him off.

“He did this to you before you did the job?” He stepped back and started pacing.

“No,” she almost whispered. “When I got there he started moving fast. He said I was late. I wasn’t late, T. You know. You dropped me off. I didn’t have time to get the money beforehand. I know I messed up, T. Please don’t be angry with me. Please.”

T didn’t say another word, which scared her. Her body trembled. He stormed into the apartment smacking the glass door as he went. It cracked. He opened a cabinet and pulled out a couple of guns and a knife. He yelled down the hall, “Get up, Rick! We got a score to settle.”

Her heart raced as she looked out over the city. Just as her breathing started to settle, he came up behind her again. This time he grabbed her, having no concern for her injuries, and dangled her over the balcony by her feet.

“Don’t you ever show up after a job without my money! You hear me? If you do, I’ll drop you and you’ll be replaced before you even hit the ground. You got it, bitch?”

She nodded as he let her fall in a heap on the balcony floor and stormed back inside. Her body wracked with sobs as T yelled, “Let’s roll!”

She clung to the sliding glass door for support as Rick came in the room, pulling his shirt on. “What the hell?” He stared at her.

“We ain’t got time for this,” T said. “We got a score to settle.” He tossed Rick one of the guns. “Some prick did this and sent her home without money. I’m gonna kill his ass. Don’t nobody mess with my money!” He rushed out ahead of Rick. Rick followed with a glance back before the door closed.

This is a hard read, for sure, but it’s necessary.  We need to be informed. We need to tell others. We need to take action. William Wilberforce once said,

You may choose to look the other way, but you can never say again that you did not know.

What will your next step be?