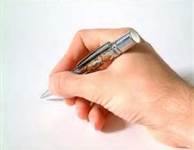 Do you have an autograph of anyone famous? When I was little my older brother, David, received a Dallas Cowboys picture that had been autographed by several of the players. He was beyond excited because he loved the Dallas Cowboys (that was back in the Tom Laundry days for those of you who are Cowboys fans).  My neighbor is a die hard Third Day fan and he paid handsomely for an item autographed by Mac Powell.

When someone’s signature is attached to something they made or a photograph of them, it tends to increase in value, especially if that person is famous or dead.  John Lennon for example,

An original (not reproduced) signature can fetch anything from $100 to over a million depending on what else is on the page. For example, a working set of lyrics to a John Lennon song, handwritten and signed by Lennon sold at auction for $1,250,000.

There’s something about a person putting their mark on their creation that drives up the value.  The signature denotes ownership or authenticity. There is no artist on the planet like the Lord.  He created the heavens and the earth [Genesis 1:1]. He created it everything [Revelation 10:6]. He even created us,

Then God said, “Let us make man in our image, in our likeness, and let them rule over the fish of the sea and the birds of the air, over the livestock, over all the earth, and over all the creatures that move along the ground.” [Genesis 1:26]

Out of all of His creations, humanity is His crescendo, His masterpiece. There are many things humans can do that no other species in creation cannot do, such as walk upright or blush. We also have the ability to reason and to love.  Jesus puts His mark on us, so to speak, the day we ask Him to be Lord and Savior of our lives.  His mark is the covering of His blood.  Just as the Israelites used blood to mark their doors as a symbol of those belonging to Yahweh, we are marked by the sacrificial blood of Christ [Exodus 12:22, 1 Peter 1:18-19, Revelation 7:14, and Revelation 12:11].

Because we have been signed by Jesus we can know we have great value in the Kingdom. Christ Himself willingly stepped down from heaven and surrendered His life for us [John 3:16, Romans 8:28].

The value of anything is determined by the prices someone is willing to pay.

Christ was willing to pay everything for us with His very life.  He has signed us and calls us His own [John 17:9].

The next time someone tries to tell you that you’re worthless, remember the value the Lord placed upon you.  Remember the price He was willing to pay. You may mean nothing to some people, but to Him, you mean everything. He’s famous and He was once dead (although He is very much alive now), which makes His mark on you cause your value to go up. When the rest of the world tries to tell you that you’re worthless, remember what He said.  To Him, you’re priceless!

I wanted to let you all know that I’ll be signing my creation, Rescuing Hope, this Thursday, January 10th from 7-9 p.m. at the Daily Grind in Marietta, Georgia. I’d love the opportunity to meet you.  I hope you’ll join me.