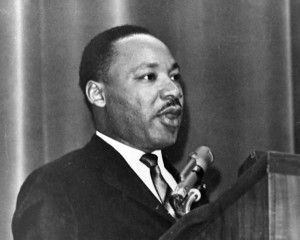 What is your dream?  Do you have one?  Is it beyond what you’re capable of doing on your own?  Dreams aren’t really dreams unless they’re naturally beyond your reach.  Otherwise, they’re just plans.

Martin Luther King, Jr. had a dream.  In his famous I Have a Dream speech, he declares,

I have a dream that one day this nation will rise up and live out the true meaning of its creed: “We hold these truths to be self-evident, that all men are created equal.”

I have a dream that my four little children will one day live in a nation where they will not be judged by the color of their skin but by the content of their character.”

He dreamed for something that was beyond one man’s ability to make a reality. He dreamed to see freedom fulfilled, racial equality and peace among a nation. What he dreamed for required extreme faith and a willingness to walk out that faith as God directed him, when it wasn’t easy, popular or safe.

If we don’t need God to make our dreams a reality, then we’re dreaming too small.

God has been known to give His children an enormous dream, far beyond their reach, so they would have to fully rely upon Him to see if fulfilled. In the Old Testament, God told Joseph in a dream that he would rise up and people would bow down to him [Genesis 37:3-10].  It didn’t play out the way Joseph would have thought; however, the Lord did bring it to pass, just as Joseph had dreamed [Genesis 45].

In the New Testament, the Lord spoke to another Joseph in a dream and told him he would be the earthly father to the Son of God [Matthew 1:20]. Can you imagine the fear and trembling that message would bring upon a man?

Has God placed a dream in your heart? Are you willing to trust Him enough to take the leap of faith as many warriors have before you?  Remember, you aren’t responsible for completing the task, simple responding in obedience.  1 Thessalonians 5:24 are words to cling to as you step out in faith,