Which eye are you looking through? 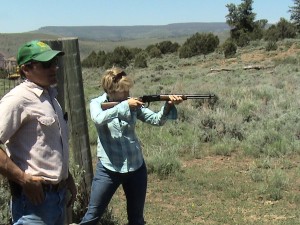 Have you ever shot a gun? The first time I ever held a gun was at Black Mountain Ranch a few years. The range instructor, Anna, saw my immediate fear and worked with me until I was comfortable shooting anything she put in my hands. I wasn’t very accurate, but I did overcome my fear of guns.

Recently, I’ve been going to the range working on my accuracy. I took a class this past weekend where the instructor pointed out my biggest problem with my shooting… I was using the wrong eye to aim. Because I’m right handed, I assumed I was right eye dominant, which is the norm; however, I’m left eye dominant. It makes a huge difference when you’re looking at the target properly. I actually put a few bullet holes in bullet holes, which was a huge improvement.

On the drive back from the range, I couldn’t help but think of the survivors of human sex trafficking I’ve be blessed to walk alongside of as they fight to put their lives back together. Many of them have a great deal of trouble doing so, because they’re looking at themselves through the enemy’s eyes. They see themselves as worthless, helpless and a waste of time. They need to shift to the eyes of the Lord to see what He sees when He looks at them.

For My thoughts are not your thoughts, neither are your ways My ways,” declares the LORD.

The same can be said of you and me. We tend to lean towards the enemy’s perspective of us and our value instead of the Lord’s. So, do you want to find out what the Lord thinks of you? Ask Him. I encourage you to find a quiet place today and ask Him to reveal any lies you believe about yourself. Trust me, He knows, and He desires to remove the lies from your mind and replace them with truth. Ask Him what He thinks about you, but you better have a notepad and tissue nearby. When He tells you His thoughts of you, which are many, it will rock your world. Write them down so you can refer to them when the enemy tries to tell you otherwise. I’d even encourage you to write them in the back of your Bible so you’ll always know where they are.

Looking through the proper eye helps you see more accurately. When you look in the mirror, whose eyes are you looking through?