Bring trafficking to an end in Georgia! 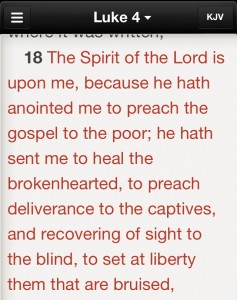 Today is Lobby Day at the state capitol in Georgia.  I will be joining individuals from Wellspring Living, Out of Darkness, youthSpark, Street Grace, and others as we unite our voices as a voice for hope for the hundreds of Hopes held captive in the state of Georgia. If you cannot join us in person, please join us in prayer, as we speak up for those who cannot speak for themselves [Proverbs 31:8a].  Write and/or email your elected officials today, asking them to:

Remember what the Lord Himself declared in Luke 4:18-19,

The Spirit of the Lord is on me, because he has anointed me to preach good news to the poor. He has sent me to proclaim freedom for the prisoners and recovery of sight for the blind, to release the oppressed, to proclaim the year of the Lord’s favor.”

Let this be the year, the year Georgia takes a strong stand for our children and declares in the state of Georgia, children are NOT FOR SALE!
By Susan Norris|2013-02-07T06:18:06-05:00February 7th, 2013|Christ Follower, Human Sex Trafficking, Women, Young Adult|0 Comments