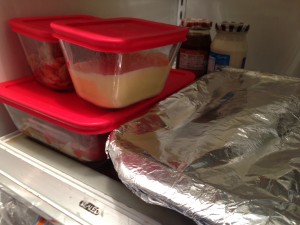 Do you like leftovers? When my son was home, we rarely if ever had leftovers from one day to the next. He would eat whatever I prepared for dinner two to three times before going to bed and if there happened to be anything left when he went to sleep, he would take care of it for breakfast, no matter what dinner happened to be. Yes, we would frequently smell things like salmon or refried beans being warmed up in the morning.  It was enough to make you skip breakfast.

I’ve never been one to care for leftovers.  It’s not that I’m wasteful or think I’m too good for leftovers, but to me, things rarely taste as good warmed up the next day, with the exception of soups.

Now before you go off on me, let me just say, I’m in good company.  From the very beginning God has requested first fruits. I guess He isn’t a fan of leftovers either. He asks for us to give Him our best, the cream of the crop.

But Abel brought fat portions from some of the firstborn of his flock. The LORD looked with favor on Abel and his offering, but on Cain and his offering he did not look with favor. So Cain was very angry, and his face was downcast.

What did Cain do that was displeasing to God? Why was Abel’s gift viewed so favorable and Cain’s not?

If we continue reading in Genesis 4, we get a glimpse of God being Father, parenting Cain, trying to teach him about his mistake and how to do better the next time.  Genesis 4:6-7 says,

Then the LORD said to Cain, “Why are you angry? Why is your face downcast? If you do what is right, will you not be accepted? But if you do not do what is right, sin is crouching at your door; it desires to have you, but you must master it.”

Cain had brought the Lord “some of the fruits of the soil” as an offering [verse 3].  Nowhere does it indicated they were the best or the worst, just some of the fruits of the soil.  Abel, however, brought “fat portions from some of the firstborn” as his offering [verse 4].  Throughout Scripture, the firstborn was sought for the offering to the Lord because it was considered the best and the fat portions were considered to be the best of the best [Exodus 13:12, Leviticus 9:19-20, 24].

“By an act of faith, Abel brought a better sacrifice to God than Cain. It was what he believed, not what he brought, that made the difference. That’s what God noticed and approved as righteous. After all these centuries, that belief continues to catch our notice.