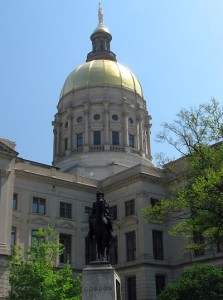 What does it mean to lobby for something? Lobbying means to actively try to influence legislation on a specified topic.  It means to use your voice, be it in person, via mail or email, to draw awareness to an issue and ask legislators to do something about the issue.  It is our constitutional right and responsibility to let our elected officials know how we’d like them to vote.

This Thursday, February 7th, is Lobby Day  in Georgia on the issue of human sex trafficking in America.  Men and women from across the state of Georgia will come together on the capitol steps to stand as one, one voice with one mission.  Our purpose is to draw attention to the heinous practice of human sex trafficking, not just in our nation, but specifically in the state of Georgia.   Some articles rank Atlanta as the number one city in our nation where human sex trafficking takes place.  However, reports vary, depending your source.  What is known is Atlanta is one of the major hubs where this takes place.

Organized by Street Grace, Lobby Day pulls people from every organization taking a stand on the issue of human sex trafficking. United we take to the halls of Congress and cry out for those who have been silenced.  You, too, can raise your voice for hope by registering here to join us on Thursday.

No only is raising our voice in Congress a constitutional right and responsibility, it is a Biblical responsibility.  In Proverbs 31:8a we’re called to,

I tell you the truth, whatever you did for one of the least of these brothers of Mine, you did for Me.”

How many of us would want to be held against our will and forced to do the unthinkable? The victims of human sex trafficking are held in bondage, whether by physical chains or simply mental ones.  They have been trapped and they have been silenced.  They are desperate for someone to take a stand, to speak out for them. Will that someone be you?