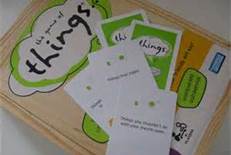 Do you like to play games?  This weekend I was introduced to a new game called Things. It is similar to Balderdash in that a card is read, then every player writes down a response which is shared anonymously with the group.  The object of the game is to determine who wrote each answer.  The more you guess correctly, the more points you earn.  The obvious answers aren’t as easily predictable as the more creative ones, but the creative ones tend to lend themselves to more crowd response. It was a great way to get to know your friends in a new way.

I thought it would be fun to play one card with you.  Are you up for it? Well, since I can’t hear your response from my computer, here we go. “Things you shouldn’t leave home without doing” (I have no idea if this is a real card in the game, but at least I followed the format).

These are just a few of the common items people would list to such a statement.  Do you have others I failed to list? If so, please share them in the comments. I hate to beg, but I need a good laugh on a Monday morning.

How many of you would have added “Have quiet time with the Lord” to your list? It sets the pace for your entire day.

Those are the days I tend to operate in my own strength, which isn’t very strong.  Have you seen the size of my bicep?  I got nothing. But when I pause at the Lord’s feet, He fills me up to overflowing with all of Him.  It’s on those days the world better look out.

I can do everything through Him who gives me strength.”

I would much prefer to operate in the strength of the One who created heaven and earth, the One who the word impossible never applies, than my own strength [Luke 1:37].

Just in case I thought I might be able to do it on my own, Jesus spells it out in John 15:5,

I am the vine; you are the branches. If a man remains in Me and I in him, he will bear much fruit; apart from Me you can do nothing.” [Emphasis mine]

As you run through your list of things to do before you leave the house, make sure pausing to spend time with the Lord makes your list, because it will make your day!