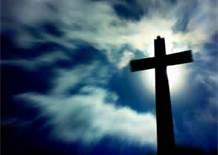 When you’re in the midst of a deep, dark season of life, do you call it good?  Is it something you’d knowingly walk into and anticipate? If you’re like most people, the answer to both of those questions would be a resounding, “NO!”

He was despised and rejected by men, a man of sorrows, and familiar with suffering. Like one from whom men hide their faces He was despised, and we esteemed Him not. Surely He took up our infirmities and carried our sorrows, yet we considered Him stricken by God, smitten by Him, and afflicted. But He was pierced for our transgressions, He was crushed for our iniquities; the punishment that brought us peace was upon Him, and by His wounds we are healed.We all, like sheep, have gone astray, each of us has turned to his own way; and the LORD has laid on Him the iniquity of us all. He was oppressed and afflicted, yet He did not open His mouth; He was led like a lamb to the slaughter, and as a sheep before her shearers is silent, so He did not open his mouth. By oppression and judgment He was taken away. And who can speak of His descendants? For He was cut off from the land of the living; for the transgression of my people He was stricken. He was assigned a grave with the wicked, and with the rich in His death, though He had done no violence, nor was any deceit in His mouth. Yet it was the LORD’s will to crush Him and cause Him to suffer, and though the LORD makes His life a guilt offering, He will see His offspring and prolong His days, and the will of the LORD will prosper in His hand.”

Why? Why would Jesus subject Himself to this? Because He it was His destiny.  He is the only person in the world who chose to be born and He willingly and purposefully made the journey into Jerusalem holy week to die so that we might live [1 Peter 2:24].

Scripture tells us that the earth grew dark and shook violently  [Matthew 27:45,51]. It was a dark time for all of creation, but it wouldn’t last forever.  That Friday was a hard day, but we call it Good Friday because of Sunday.

Sunday was a fulfillment of a promise from God in John 2:19 when He said,

Destroy this temple, and I will raise it again in three days.”

Are you in a difficult time? Is life a little dark for you right now? It may feel like you’re stuck there; don’t give up.  You’re not alone [Deuteronomy 31:6, 8].  Jesus knows what it feels like to be in a dark and lonely place and want things to change [Luke 22:42]. He will carry you through to the other side [Psalm 23:4].  It may feel like Friday, but Sunday’s coming.