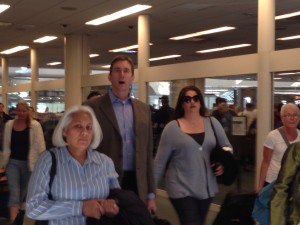 Do you like surprises? Or are you one of those people who likes to know everything in advance?  My husband isn’t one for surprise parties or large crowds where he is the center of attention.  He prefers the more intimate settings with a few people.  I made the mistake when we were first married of planning him a surprise birthday party.  I’ll never forget what he said when we climbed in the car to go home.

I love you more than life itself and I appreciate all the work it took for you to do this for me, but please don’t ever do it for me again.”

Well, I learned through the years that the surprise part wasn’t what he had a problem with, it was the crowd of people in front of him starring at him. So, I’ve filed that little tidbit of information and held onto it until last week.

My husband is the most amazing man in the world to me. He is my best friend, my biggest cheerleader, and he pushes me out of my comfort zone into whatever God calls me to do, even write a book.  There were many times during the writing and publication process of Rescuing Hope I wanted to quit.  I knew I was in way over my head, but Mark continued to remind me if God called me to the task, He would do it [1 Thessalonians 5:24].  He would leave notes of encouragement throughout the house and in my office to cheer me on.  He was the living and breathing example of Ecclesiastes 4:9-10,

Two are better than one, because they have a good return for their work: If one falls down, his friend can help him up. But pity the man who falls and has no one to help him up!

I am not to be pitied, because I have Mark. He’s lifted me up for over twenty-two years and I wanted to do something for him.  Ever since he was a little boy, he’s dreamed of going to watch the Braves at spring training.  It’s been a dream that has never materialized, until last week. 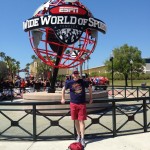 With the help of his boss, the office manager, a couple of his customers and countless friends, Mark boarded a plane heading to Orlando for what he thought was a business trip.  When he landed, he found the surprise of his life.  I was standing there, calling his name, creating complete confusion for him.  After assuring him everyone was okay back home, I told him he had been bamboozled and he wasn’t in Orlando for business but for spring training.  It took a phone call to his boss and a few hours for him to truly believe what I was telling him, but once it sunk in, he fully embraced it.

You just thought you knew why you were coming to Orlando, but I had other plans for you.”

As I’ve reflected back over our weekend I can’t help but wonder how many times God has said the same thing to me about my plans.  How many times have I thought I was in charge of what was going on in my life only to find out I wasn’t?  How many times has He orchestrated changes or interventions for me?