Will you accept this heart? 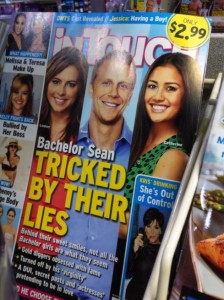 Did you watch the Bachelor finale last night?  Sean Lowe was faced with decision of a lifetime.  After months of dating multiple women, he had narrowed the choice down to Catherine and Lindsay. Which woman would he send home and which one would he choose to spend the rest of his life with?

Lindsay was confident.  She arrived at the final rose ceremony fully expecting to see Sean go down on one knee and ask her to spend the rest of her life with him.  Catherine was nervous and unsure of everything except for her feelings for Sean.  In the end, they were both shocked.  Lindsay was shocked because Sean sent her home empty handed.  While he cared for her, she wasn’t the one.  Catherine was shocked, because she was the one.  Sean went down on one knee and asked her to be his wife and share her life with him forever.

I have to admit, I’m a bit skeptical about the whole process.  The success rate of relationships established on the Bachelor isn’t very high. Both Catherine and Sean seem to be people of faith, so maybe it will work for them.  For their sake, I hope so. But more often than not, what happened to Lindsay seems to be the norm.  People come on the show, put their hearts on the line and walk away brokenhearted.  Let’s face it, Sean could only choose one girl and he started out with 25.  You do the math.

There’s someone for everyone.”

I have enough amazing single friends out there who are desperate to find the love of their lives to know that doesn’t always pan out.  But, I do know there is One who is looking for love from everyone and He has the capacity and the ability to return it to all who will chose Him.  His name is Jesus.  He chose us, every one of us [John 15:16].  He loves us enough to give us His life for us [John 3:16].  He will never walk away from us, leaving us to wonder what is wrong with us or why didn’t He choose us [Deuteronomy 31:6, 8].  In Jeremiah 31:3, He says,

I have loved you with an everlasting love;”

so you don’t have to worry about Him changing His mind once no one is looking.  He loves forever.

What’s not to love about Him?  He’s the perfect catch. He’s standing before you, not with a rose, but with His heart in His hands.  He’s asking you a simple question.  Will you accept this heart and give me yours in return?  Will you?