Who is your neighbor? 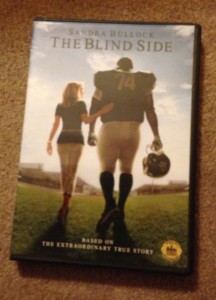 Did you watch The Blind Side last night?  It was on network television and even though we own the movie, when we came across it channel surfing we landed there and watched it for a while.  I love the movie and I particularly love Sandra Bullock as Leigh Anne Tuohy.  She is classy and sassy and will fight like a mama bear when it comes to her children, including the big one she adopted, Michael Oher.  Michael was a young homeless man who had no one in his corner, that was until he fell on Leigh Ann Tuohy’s radar.  The moment she became aware of his need, she set out to meet it, not because she had money to do it or for the notoriety that would later follow, but because the need existed.

How many times do we see a need and assume someone else will take care of it? Or worse yet, how many of us respond like the priest or the Levite in Luke 10:31-32, when they saw a man in need of help in their path, they crossed the street and continued their journey on the other side of the road in order to avoid him? Jesus never told us to take care of or get involved in things when it was convenient, would benefit us or would fit into our plan.  He said we are to love the Lord our God with all of our heart, soul, strength and mind and we are to love our neighbor as ourselves [Luke 10:27].  We don’t get to pick and choose who our neighbor is.  People who are anywhere in our surroundings- where we live, work or play- they are our neighbor and He expects and even commands us to help them [Luke 10:37].

It takes the Body of Christ working together to change the world.  When one person doesn’t step up and do their part, it impacts the whole team.  In the Blind Side, Leigh Anne pulled Michael aside at football practice and explained to him what his job was and how the whole team was depending on him to do it.  If he failed, the whole team failed.  Once Michael understood his job, he did it and he did it well.  We don’t need Leigh Ann Tuohy to tell us what our job is.  Jesus spelled it out for us clearly in Luke 10:25-37.

Yesterday, I was scrolling through my newsfeed on Facebook and came across a quote by a friend of mine, Misty Pope.  She said,

I’m on God’s team and I will not be satisfied sitting on the bench!”

None of us were created to sit on the bench.  We were all created to be on the team in the game doing our part. Where are you right now? Are you sitting on the bench watching others do amazing things for the Kingdom, wishing you were a part of it? Or have you even failed to dress out? In case you didn’t notice it, there are two teams battling it out right now and Jesus drafted you on His team.  He chose you [Ephesians 1:11].  It’s time to get in the game and do your part. There are people out there depending on you.

So what’s it going to be? Are you going to get in the game?