How Do You Kill 11 Million People? 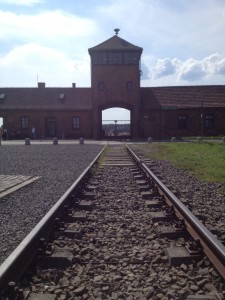 The entrance to Auschwitz, taken by Sam Norris

Have you read How Do You Kill 11 Million People? by Andy Andrews?  It is a fabulous little book you could read in about an hour.  Andrews addresses the Holocaust, the lessons we should learn from it, and the danger of repeating history is we’re not careful. Andrews never states if he is Democrat or Republican, nor does he speak out about specific decisions our nation’s leadership has made.  He simply wants to get the reader thinking and asking the right questions.

The book intrigued me, because I see similarities between the victims of the Holocaust and sex trafficking. The answer to his question, and the title of his book, How Do You Kill 11 Million People? is rather simple.  You lie to them.  Andrews says,

Make the lie big, make it simple, keep saying it, and eventually they will believe it.”

It didn’t take an enormous army to bring about the Holocaust.  In fact, Andrews states,

Even at the height of its power in 1945, the Nazi political party boasted only 8.5 million members. So the remaining 90 percent of Germans- teachers and doctors and ministers and farmers- did… what? Stood by? Watched? Essentially, yes.” 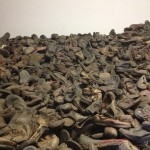 Shoes of the victims. Photography by Sam Norris

Are you starting to see the correlation I found between the Holocaust and sex trafficking.  One pimp said,

All I had to do was find out what the girl needed, then I’d become her solution.  If she was hungry, I’d feed her.  If she needed a place to stay, I’d provide it.  Once she accepted I was the answer to her problem, I had her.”

The victims are lied to from the beginning.  The lies are basic, simple and they fall for them hook, line and sinker.

The only thing necessary for the triumph of evil is that good men do nothing.

Andrews goes on to say,

Mothers and fathers held their voices, covered their eyes, and closed their ears. The vast majority of and educated population accepted their salaries and avoided the uncomfortable truth that lingered over them like a serpent waiting to strike. And when the Nazis came for their children, it was too late. [italics mine]

Sex trafficking is not a respecter of persons.  It impacts black, white, Hispanic, Asian, rich, poor, educated, uneducated.  It’s in our cities, in our suburbs, in our malls, our schools, and our neighborhoods.  It’s wherever our children are. We have to wake up.  We have to open our eyes and learn what to look for when it’s right in front of us.

We cannot remain silent.  We cannot hold our voices.  We must unite them and raise them against this atrocity.  Proverbs 31:8 says,

Will we allow history to repeat itself?  Will this nation allow children to be snatched from their childhoods and destroyed because a man deems it appropriate?  Will you?  If not, what will you do about it? For suggestions, go here. Just like with the Holocaust, you are either part of the problem or part of the solution.  Which will you be?