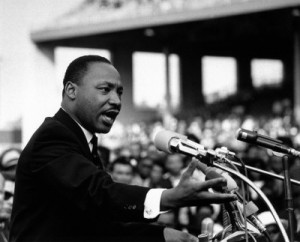 What do you dream about doing? Is there something you would love to do, but it seems too difficult, nearly impossible? God loves dreamers.  He writes about them in His book.

Jacob was a dreamer.  In Genesis 28:10-22 he dreamed of a stairway going from heaven to earth with angels ascending and descending on it. God used the dream to speak to Jacob and let him know he wasn’t alone.

Joseph was a dreamer.  Just a few chapters later in Genesis 37, Joseph has two dreams and shares them with his brothers. His brothers weren’t too impressed with his dreams.  They thought he was an arrogant, braggadocios brother and they got rid of him; however, the Lord used those dreams to speak to Joseph about his future.

What is your dream? Does it seem impossible?  Luke 1:37 reminds us,

For with God nothing shall be impossible.” [KJV]

Today is the 50th anniversary of the “I Have A Dream” speech by Martin Luther King, Jr.  He had a dream for people to be treated equal, irregardless of their gender or skin color. I’m sure it looked impossible for him at times, but he was a man of deep abiding faith and he trusted the Lord to carry out his dream.  He knew 1 Thessalonians 5:24 well,

My dream is to see modern day slavery come to an end, so men, women, and children will no longer be bought and sold like a commodity on a shelf. I dream of children being about to be children instead of being trafficked for sex. This dream is much, much larger than a suburban housewife is able to accomplish; however, if I will do what God has called me to do and others do what God has called them to do, it could happen.

Okay, I’ve shared my dream. So, what is your dream?  I’m really curious.  I hope someone will respond in the comments. Don’t worry if it sounds crazy big or out of your reach.  I’m certain there were times Dr. King felt his dream was out of reach, yet today, the President of the United States is an African American, not something people would have thought possible fifty years ago.

Wake up all you dreamers! It’s time to chase your dreams.