How to Turn Your Problems into Opportunities 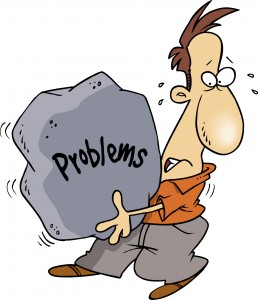 How do you handle disappointment or problems when they come knocking at your door?  Does it change the way you act, feel, or think?  When problems are small, most people just roll with it, but the big ones can stop us in our tracks.

My buddy, Joe, seemed to have one big problem after another.  In fact, some might consider Joe a magnet for trouble.  The sad thing is, he never really caused his problems.  They just seemedprobl to find him and stick around for a while. Have you ever felt that way?  Well, maybe you can learn a thing or two from Joe and how he handled his problems.

Joe was a dreamer. While that wasn’t a problem, when he shared his dreams with his brothers, they thought he was bragging and it caused them to hate him.  They hated him so much, they sold him into slavery [Genesis 27:1-35].

Now slavery may seem like a far fetched concept in today’s world, however, it is estimate there 27 million slaves in the world today.  That’s more people held in bondage than any other time in history. To learn more about that, you can click here.

Now back to Joe. He was taken to a foreign land and sold to a high ranking official.  Now he could have gotten mad at his brothers and his situation. He could have even gotten mad at God, but he made a decision to focus on the Lord instead of his circumstances and it went well for him [Genesis 39:4-6].

Just when you think things are going to go well for Joe, the wheels fall off the bus.  The wife of his boss came on to him and wanted to have an affair with him. Now Joe could have done so and probably could have milked it for all he was worth, but he took the high road and it landed him in a worse situation [Genesis 39:19].

Joe was at the lowest possible time in his life, living in prison for a crime he didn’t commit.  He could have become angry, bitter, and mean, but instead, he chose to bloom where he was planted and work as if working for the Lord [Colossians 3:23]. The Lord never left him, even though it seemed like the Lord was nowhere to be found [Genesis 39:21]. And ultimately, the Lord established Joe in the highest ranking position possible for him [Genesis 41:45].

Has that ever happened to you? You’ve done the right thing, the thing you knew God was leading you to do and it didn’t play out the way you imagined. That’s what’s so cool about God. Just when it looks like there’s no way out, God flips a switch and then BAM. You’re in a fabulous place and not even sure how it happened.  God’s plans never fail [Jobe 42:2].

Let us fix our eyes on Jesus, the author and perfecter of our faith, who for the joy set before Him endured the cross, scorning its shame, and sat down at the right hand of the throne of God.”

We all have problems in life.  Jesus told us it would happen [John 16:33]. Some of our problems are small and some of them are pretty significant, like Joe’s. We can’t pick or choose our problems, but we do get to choose how we’ll respond to them. How will you respond to your problems today? Take the time to turn your problems into opportunities.