Should we enter enemy territory? 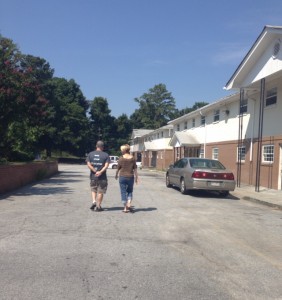 Have you ever gone somewhere dangerous? A place that would be considered enemy territory? You have to enter with confidence in order to do so, knowing you have the full weight of heaven behind you as you go.

In Mark 5:1-20 you find a story of Jesus doing just that, walking boldly into enemy territory. He had traveled by boat to an area where a demon possessed man lived among the tombs.  He didn’t choose to live among the tombs.  He was cast there by the people of his village because they didn’t know what to do with him.

This man lived in the tombs, and no one could bind him any more, not even with a chain. For he had often been chained hand and foot, but he tore the chains apart and broke the irons on his feet. No one was strong enough to subdue him. Night and day among the tombs and in the hills he would cry out and cut himself with stones.”

He was an outcast. No one wanted anything to do with him, no one except Jesus. Jesus didn’t hesitate to walk into enemy camp and straight to the man.  He didn’t see the man as a problem. He saw the man as a victim of evil and He was willing to help him.

Too many times in our culture we like to take those who have been manipulated by the evil one and cast them aside, pretending they don’t exist, moving them to the outskirts of town, forgetting about them.

This past weekend I had the opportunity to walk into enemy territory and encounter such people and I will never be the same.  In fact, I can’t wait to go back.  The Atlanta Dream Center has a Saturday morning ministry called Adopt-A-Block. It is made up of a group of volunteers from their church and community who go out each Saturday to various parts of Atlanta and love on people, taking them food, asking them how their week has been and offering to pray for them.  They also offer them a ride to church the next day.  Each group is led by a block pastor, someone who is responsible for a block of the city and the people who live there.

I had the opportunity to travel with Judy and Dave, block pastors, to an apartment complex that is filled with victims of the sex trade and drug dealers. As you can imagine, it’s run down and very rough looking. Enemy territory for certain, for the devil runs freely through the streets and buildings, destroying every life he can along the way [John 10:10]. We saw apartments with little furnishings, even less food and empty dime bags that had contained drugs scattered outside the doors. We saw poverty, desperation, captivity without visible chains.

The moment the white van pulled into the parking lot the doors opened and children came running, excited to see us.  Judy, Dave and their volunteers weren’t new to this area.  They have been going for a long time, building relationships with the residents. They were greeted by name and welcomed into most of the homes.

I had the privilege of praying with some of the sweetest people I’ve ever met; people who have fallen victim to one lie or another of the enemy’s who are desperate for Jesus. As we loved on them, took them food, and prayed for them, we were Jesus with skin on [Matthew 25:40].

As we drove away with the children chasing the van, waving goodbye, I couldn’t help but think THE Church needs to do more of this.

The Body of Christ needs to boldly, but wisely, enter enemy territory and bring the light into the darkness.

You are the light of the world. A city on a hill cannot be hidden. Neither do people light a lamp and put it under a bowl. Instead they put it on its stand, and it gives light to everyone in the house. In the same way, let your light shine before men, that they may see your good deeds and praise your Father in heaven.”

How long has it been since you’ve set foot into enemy territory? For some, it may be daily as they go to work. For others you may live in enemy territory with lost family members. We need to look for opportunities to carry light into the darkness and then walk boldly, trusting the Lord to guide our steps and direct our path [Proverbs 3:5-6].

What is one thing you can do today to take the light into the darkness?