Do you hear them? 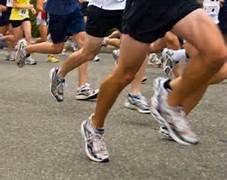 Have you ever attended a running race? I’ve been to four as a spectator and two as a competitor. One of my favorite races to follow was my brother’s Ironman race in Florida several years ago. The level of determination on the faces of the competitors was impressive. They swam 2 miles in the ocean, biked 113 miles and then ended the race by running a marathon. Any of those legs of the race on it’s own is impressive, but to combine the three in one day is borderline insane.

Our family traveled to various points along the race route to cheer for Steve and the other racers. It is one of the few sporting events I’ve ever attended where everyone is pulling for everyone.

I’ve only run 5K races, but was impressed by the number of runners who would line the track after crossing the finish line to cheer on others coming behind them. While the cheers of bystanders would help spur me on to get to the finish line, it was nothing like the cheers of someone who had finished the race, because they knew what I was experiencing. They’d run the same path and had finished successfully. Their cheers basically said,

I did it and you can do it too. Just a little father and you’re finished!”

I have a race coming up this weekend and I haven’t been able to train like I want due to an injury, but I did start back running yesterday, so running has been on the brain. This morning, when I read Hebrews 12:1-2, I couldn’t help but think of the verses from the perspective of a race,

Therefore, since we are surrounded by such a great cloud of witnesses, let us throw off everything that hinders and the sin that so easily entangles, and let us run with perseverance the race marked out for us. Let us fix our eyes on Jesus, the author and perfecter of our faith, who for the joy set before Him endured the cross, scorning its shame, and sat down at the right hand of the throne of God.”

The cloud of great witnesses isn’t made up of onlookers. It is made up of those who have lived life before us, traveled the path we’re traveling and have been victorious. They know it can be done and they’re cheering us on as we grow closer to the finish line. Can you hear them yelling for us? They want us to learn from their journey by studying their stories in God’s Word. 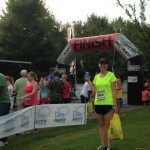 No matter where you are on the path of life, no matter what season you’re in, you are not alone. Yes, Jesus is with you, but there is also a crowd of witnesses cheering you on, pulling for you every step of the way.