Do you need an exterminator? 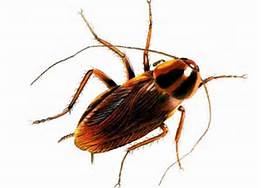 He said when he saw the first roach, he reacted as most people would, “Gross! Kill the thing.” But then he became a little more comfortable with them in his apartment. He saw them, but he was busy doing other things so his response was more like, “Hey, man, there’s another roach,” and then he went on about his business. Eventually, he and his roommates named the roaches, watched them crawl around the kitchen and coexisted with them.

Now as nasty as that sounds, we often do the same thing with sin in our lives. When we first recognize it, we’re offended by it’s presence. We want to kill it and get it out of our lives. But then when it happens again, we may gloss over it or be so wrapped up in other things we let it slide. We become a little more comfortable with it, until one day it’s part of our lives and we’ve become pals with it, naming it something other than what it is so we feel better about having it in our lives.

A little yeast works through the whole batch of dough.”

We can not allow a little sin to work its way into our lives or the next thing you know we’ll be calling it something else and coexisting with it. We’ll begin comparing our sin to others, justifying it because it isn’t as bad as someone else’s sin. God’s word is very clear about sin.  God cannot and will not coexist with any of it. He doesn’t measure it as big sin or little sin. Sin is sin, period. He is, however, willing to help us get rid of it when we take it to Him.  1 John 1:9 says,

If we confess our sins, He is faithful and just and will forgive us our sins and purify us from all unrighteousness.”

Take a few minutes today to take inventory of your life. Have you been allowing some things to slide or hang around that you’d normally get rid of? There’s no time like the present. Call the Holy Exterminator. Clean house, get rid of it, before you start to get comfortable with it, naming it something it isn’t, so it can hang around a little longer.