Why are people surprised? 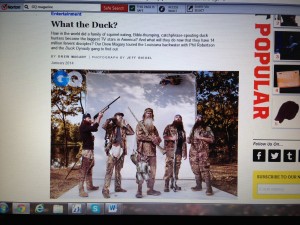 Were you surprised by Duck Dynasty‘s Phil Roberston‘s stance on homosexuality? It’s all over Facebook and Twitter. He’s had more media coverage for being who he is than many celebrities get for not being who we thought they were. Phil is outspoken and firm in his beliefs. He’s been that way long before the cameras from A & E found their way onto his property. As the old saying goes,

Phil Robertson is a Christian and he doesn’t hide it.  As Drew Magary learned in his GQ interview of Phil Robertson, Phil doesn’t mince words.

We’re Bible-thumpers who just happened to end up on television,” he tells me. “You put in your article that the Robertson family really believes strongly that if the human race loved each other and they loved God, we would just be better off. We ought to just be repentant, turn to God, and let’s get on with it, and everything will turn around.”

So why is the world shocked or offended when Phil states his beliefs? He never pretended to believe differently. When asked by Phil if he and his woman are Bible people, Magary tells him “Not really, I’m sorry to say,” Phil doesn’t find fault with Magary. He simply presents the Gospel to him and moves on. As Magary, who by his own admission doesn’t share Phil’s beliefs, wrapped up his article, he recognized Phil as the real deal. He is who he says he is, no more, no less.

We hop back in the ATV and plow toward the sunset, back to the Robertson home. There will be no family dinner tonight. No cameras in the house. No rowdy squirrel-hunting stories from back in the day. There will be only the realest version of Phil Robertson, hosting a private Bible study with a woman who, according to him, “has been on cocaine for years and is making her decision to repent. I’m going to point her in the right direction.”

It’s the direction he would like to point everyone: back to the woods. Back to the pioneer spirit. Back to God. “Why don’t we go back to the old days?” he asked me at one point. But now, I’m afraid, I must get out of the ATV and go back to where I belong, back to the godless part of America that Phil is determined to save.”

Phil appears to be the same person, whether on camera or off. He says what he believes and he lives his life accordingly. After the mass attention this article in GQ Magazine received, I looked it up and read it for myself. I’d encourage you to do so. He did not bash homosexuals. He talked about how one sin leads to another and then another. Then he goes on to paraphrase 1 Corinthians 6:9-11,

Do you not know that the wicked will not inherit the kingdom of God? Do not be deceived: Neither the sexually immoral nor idolaters nor adulterers nor male prostitutes nor homosexual offenders nor thieves nor the greedy nor drunkards nor slanderers nor swindlers will inherit the kingdom of God. And that is what some of you were. But you were washed, you were sanctified, you were justified in the name of the Lord Jesus Christ and by the Spirit of our God.”

Bottom line, the One some people are outraged by isn’t Phil Robertson; it’s Jesus. He is the word [John 1:14]. Whether it is Genesis, Revelation or anywhere in between, it’s Jesus.

My question to you is this, if someone came into your house to interview you, if the cameras were recording your every word, what would you say? Would you tone things down to be politically correct or are you, like Phil Robertson, who you are no matter whose looking?

If anyone is ashamed of Me and My words in this adulterous and sinful generation, the Son of Man will be ashamed of him when He comes in His Father’s glory with the holy angels.”