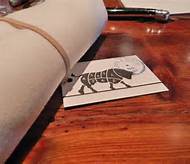 Do you go out to dinner with friends often? I meet people for coffee fairly regularly, but dinner out with friends doesn’t happen as often. It’s a time issue for me and I have a family that depends on me to feed them on a semi-regular basis. However, this is my birth month. Yes, I said month. My husband is just now figuring out that men have birth days and women have birth months. I’ve had friends taking me out for breakfast, lunch and dinner in celebration. It’s been a blast to connect with so many friends in a short amount of time (minus the two snowstorms).

The hard thing about going out to dinner with friends is how to handle the check. Do you see who will grab it first? Do you alternate? If so, who keeps track of who paid last? Do you go dutch? Well, when it’s your birth month, they tend to trump you as far as picking up the check. That’s fine when you go out for coffee or breakfast. It’s hard to have an expensive breakfast (although I’m sure some places do). This past weekend a sweet friend and I ventured out of our zip code for dinner to celebrate my birthday. There were several interesting looking restaurants along the way, so we just picked one.

I love trying new places, so I was thrilled…. that was until they set the menu in front of me and I saw the prices. I was taken back to my college dating days thinking, I’ll just have a salad. It was SO expensive. I felt really uncomfortable with the prices and did not want her to pay. I suggested we go somewhere else or split the check. She would have none of it. She finally said,

I finally conceded and thanked her, then we had a wonderful dinner. I was humbled and blessed by my sweet friends demonstration of love and friendship. To have continued to argue over the bill would have ruined our night and destroyed what she had planned to do all along.

When I sat this morning reflecting over my weekend, I laughed thinking about our banter over the bill. We do the same thing with Jesus and don’t even realize it. We concede to Him forgiving us for telling a little white lie or cheating on our diet, but when it’s something big, we insist on paying for it. We beat ourselves up. We relive the sin and pay for it over and over again. We refuse to get past it.

Nothing makes Satan happier than when we insist on paying for our own sins.

It makes his job so easy. All he has to do is agree with us when we talk about how awful we are and how Jesus couldn’t possibly forgive us for what we’ve done.

God knows we aren’t perfect. He’s our Daddy. No one knows us as well as He does. And He’s had a plan from the beginning.

Jesus wasn’t sitting beside the Father eating popcorn and Raisinettes watching the Old Testament play out poorly saying, Okay, Dad, since they can’t seem to get it right, send me in. I’ll take one for the team. Jesus coming to earth, dying on a cross for our sins, trumping anything Satan would ever try was the plan from day one. It was plan A. From Genesis to Malachi the Word pointed to Jesus coming for us.

Surely He took up our infirmities and carried our sorrows, yet we considered Him stricken by God, smitten by Him, and afflicted. But He was pierced for our transgressions, He was crushed for our iniquities; the punishment that brought us peace was upon Him, and by His wounds we are healed.”

But when they came to Jesus and found that He was already dead, they did not break His legs. Instead, one of the soldiers pierced Jesus’ side with a spear, bringing a sudden flow of blood and water. The man who saw it has given testimony, and his testimony is true. He knows that he tells the truth, and he testifies so that you also may believe.

Jesus knowingly and willingly paid for our sins. It was His plan from the beginning. We simply need to receive it and say thank you. While doing so is rarely simple, it is always necessary.

What bill are you still trying to pay? You’ll always come up short. You can never wash enough dishes to settle your bill. Jesus is standing before you with a blank check, ready to pay your bill, no matter the price. Will you let Him?