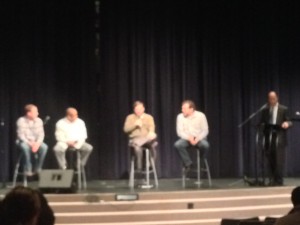 What do you think men have to say about sex trafficking? I’m sure there are plenty who don’t want to hear about it. They don’t want to draw attention to it, because then they’d have to accept responsibility for their part in it. However, last night I had the privilege of hearing from several men who aren’t only talking about it, but they’ve dedicated their lives to fighting it.

Nor For Sale hosted an event with men in mind called Men: A Solution to Modern-Day Slavery. Other than state director, Emily Laney, doing a brief introduction, the entire evening consisted of men sharing their heart about this issue and educating listeners on pornography and strip clubs and their connection to sex trafficking as well as how to raise young men not to become perpetrators.

The panel consisted of Jeff Shaw, founder of Out of Darkness, Derek Williams, former pimp and founder of Back to the Streets, clinical psychologist, Dr. Steven Knauts, and Jason King of Wellspring Living,

When speaking on pornography, Williams said,

Pornography is an easy way to move girls into the sex trade.” 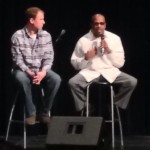 He went on to share how he would get a girl comfortable posing in front of a camera with other men in the room. From there he could move her into a strip club where she had a larger audience that would be interacting with her. The next step was turning a trick and by that point, it just seemed to be the natural progression.

Pornography doesn’t teach you intimacy. In fact, it’s the antithesis of it. It’s one sided.”

He went on to say,

Boys need to hear from men, not women, that women and girls are not objects. Men need to set the example.”

If we raise young men to honor and respect women, it isn’t by accident. It starts at a very young age. We need to rise up and raise our young men to understand as the DNA Foundation states,

This isn’t a one time conversation with your children. It takes an ongoing dialogue throughout their growing up years to raise a man who honors and respects others. Proverbs 22:6 says,

Train a child in the way he should go, and when he is old he will not turn from it.”

As the old saying goes, Actions speak louder than words. Our young men are paying attention to how their fathers treat women, what they say about them, and in particular, how they treat their spouses. They take their lead from their fathers. Our young ladies are also watching. What they witness shapes and defines their perception of who they are, how they are to be treated and what’s expected from them.

Williams shared how controlling a girl in the sex trade is more emotional and mental manipulation than physical force, although force is a part of it. King stated,

It can take 8-10 months for a girl to mentally prepare for recovery once she enters a program like Wellspring Living.”

Once a girl is no longer in physical danger, her emotions are still waging war. She will have to unpack what she’s experienced and deal with it in order to move forward.

Williams went on to say,

Girls will go back to prostitution again and again because dealing with the emotional issues is too great to face.”

One of the most heart breaking statements of the night came from Dr. Knauts when he spoke of the young women who are rescued from the life, have successfully completed a recovery program and are trying to put their lives back together,

We’re living in a digital world and things on the internet never go away. People can always view the pictures and videos on the internet, so these women continue to be objectified long after their treatment program is over.”

If you’re struggling with pornography, there is help available. There are great services, such as Covenant Eyes, out there to help you severe porns hold on you. Take a step towards freedom today… not just yours but those held captive in the sex industry. Raise your voice for hope!