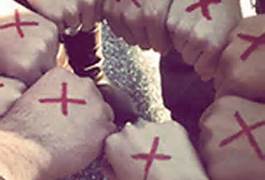 Have you noticed people with a giant red X on their hand today? Do you have any idea what it represents? It is a statement. It is a declaration. It says,

What is “it”? Modern day slavery. Seriously? Didn’t we abolish slavery in the 1800s with the Emancipation Proclamation?

Some estimate there are 27 million held in slavery today. Others say that number is too low. The Washington Post reported there are 30 million slaves in the world today and 600,000 of them are located in the United States.

How is that possible? How can people be held against their will in this country? It happens every day. People are taken into the modern day slave trade through force, fraud or coercion. Perpetrators keep their victims locked up physically and through mind manipulation. They are trafficked from a very young age. I personally have learned of cases in Georgia involving children as young as 7 years old and women as old as fifty-four.

Today, the End It Movement is challenging people to put a red X on their hands to draw awareness to the issue. When people ask what the X stands for, it opens the door to share about the issue of trafficking in the world. If you feel you don’t know enough about the issue to talk about it, get educated. One quick Google search on human trafficking will bring up a boatload of information. To learn specifics about sex trafficking in America, go here. Read books about the issue. Rescuing Hope will give you a glimpse of what it is like for a teenage girl taken into the trade in Atlanta, Georgia. Not For Sale will educate on what is taking place globally. The White Umbrella gives you a glimpse into the restoration process of a victim, once rescued.

The King will reply, ‘I tell you the truth, whatever you did for one of the least of these brothers of mine, you did for Me.'”

Today is the day. Take a stand. Draw more than a red X on your hand. Draw awareness to this heinous crime and raise your voice for hope! 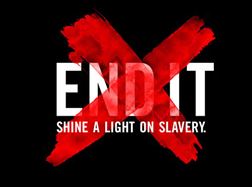