What are you holding onto? 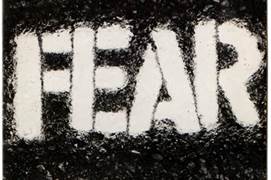 What are you afraid of? Anything? I recently finished reading the Divergent trilogy and also saw the movie.  If you haven’t read the books or seen the movie, the city is divided into five groups or factions. At age 16, people are allowed to choose their faction. The main character, Tris, chose Dauntless, which means:

not to be intimidated, fearless, intrepid, bold, daring, brave, courageous.”

This faction was known to be fearless and bold. One of the training tools used with initiates into Dauntless was fear simulations, where the person must face their fears in order to learn to overcome them. How would you like to do the same?

My son went through a similar scenario with his friends at Six Flags. He had a huge fear of heights (notice I said had). They were determined to get him on Goliath and he was determined not to ride it. His friends were smart. They took him on a small roller coaster and then progressively moved him toward Goliath. He finally decided the only way to overcome it was to face it. Now he is a roller coaster junkie.

It has been said that fear is False Evidence Appearing Real. When I hear that phrase, I immediately think of a Spongebob episode (I hated that program, but my children loved it.). Spongebob and Patrick were scared to death of this giant who was after them. When he stood in the doorway, their entire bodies trembled. However, when the light shined on the doorway, it became apparent the giant was only a shadow and the source of the shadow was plankton. Plankton, who lived up to his name in size and stature. What they were afraid of was not real.

One of Satan’s favorite weapons is fear. He’s used it since the beginning of time. When fear comes knocking at our door, we don’t have to let it in to reek havoc in our lives. We can choose to send it on its way.

We cannot control what the enemy will try and do to us, but we can control his success rate.

Who would you rather make an agreement with, the enemy or God? God tells us over and over in His word that we do not need to fear. In Joshua 10:25 He says,

Do not fear or be dismayed! Be strong and courageous, for thus the LORD will do to all your enemies with whom you fight.”

Be strong and courageous, do not fear or be dismayed because of the king of Assyria, nor because of all the multitude which is with him; for the one with us is greater than the one with him.”

…for everyone born of God overcomes the world. This is the victory that has overcome the world, even our faith.”

For God did not give us a spirit of fear, but of power and of love and of self-control.”

He is faithful and He will stand by your side. Show fear the door. Who are you embracing?