Are we really the land of the free? 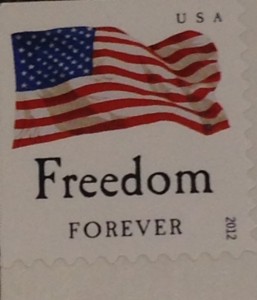 Have you ever wondered what Forever Stamps are? Basically, the United States Postal Service created stamps that never lose their value. If the postage rate goes up, then the stamp value also goes up. The beauty of this is if you purchase postage and then the rate of a stamp increases, you don’t have to go replace your postage.

Yesterday, I addressing my Father’s Day card for my daddy and reached in the drawer to pull out a stamp. I looked down and saw the stamp had the word freedom on it. But, because it was a forever stamp, it said so below the word freedom. The American flag was above the words and it struck me.

It should be the case for all people in this country unless they commit a crime of their own choosing to change their circumstances. However, it isn’t true. President Lincoln signed the Emancipation Proclamation in 1863 and the 13th Amendment passed on December 6, 1865; yet it is estimated there are more known slaves in the United States today than any other time in history.

It is for freedom that Christ has set us free. Stand firm, then, and do not let yourselves be burdened again by a yoke of slavery.”

As a nation that professes freedom, that promotes itself as the land of the free and the home of the brave, we need to do all that we can to ensure that ALL PEOPLE in the nation are free.

The Justice Department estimates there are 100,000 victims of sex trafficking in our nation every year. The National Center for Missing and Exploited Children stated there are approximately 300,000 children at risk of being trafficked each year. These children are being bought and sold for one person’s twisted pleasure and another’s financial gain. That’s not freedom. That’s slavery.

Several states across the nation have initiated a Safe Harbor Law, yet there needs to be a national safe harbor law protecting our children. According to the Polaris Project, two elements are required in a safe harbor law.  The law must:

I’m asking you to do your part in making this a reality. Write to your elected officials and let them know this is important to you and you’d like to see it happen in their next session. You can find your state representative here. You can find your state senator here. And you can address letters to the President of the United States and mail them to 1600 Pennsylvania Avenue NW, Washington, DC 20500.

Our armed forces pay a high price to protect our freedom every day. Are you willing to be inconvenienced a little to protect the freedom of a child?