5 Ways You Can Fight Sex Trafficking in America 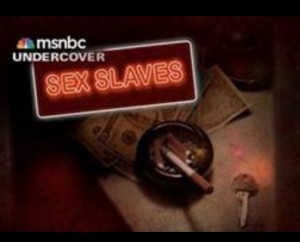 Do you ever watch MSNBC? It is one of the few networks that boldly shines a spotlight on the issue of sex trafficking in America through their series, Sex Slaves. They travel across the nation, highlighting various cities where law enforcement is taking steps to crack down on the purchasing of sex.

Sometimes, the target is the demand side. Law enforcement agencies set up sting operations and use undercover police officers to pose as prostitutes. Once a deal is made, the john- the person purchasing sex- is arrested on the spot.

Other times the purpose of the operation is to rescue the girls and the undercover officers pose as johns. They set up shop in a hotel room while other officers are monitoring hidden cameras in the adjacent room. Once a deal is made, the doors open and the arrest is made.

While there have been several episodes of Sex Slaves, there still seems to be a lack of awareness of the issue of sex trafficking in this country.

Awareness is the first step in fighting this heinous crime.

People don’t notice what is happening right under their noses. In fact, sex trafficking is called the crime hidden in plain sight. This isn’t just a third world country issue or an inner city issue. This is as close as our backyards.  As I travel the country speaking, I’m astounded by the number of people who are just hearing about it.

Recently, USA ran a Law & Order SVU marathon where they highlighted the issue of sex trafficking to draw attention to this issue. Some of the episodes focused on internationals being brought into our country for trafficking purposes, but the majority of the episodes focused on the homegrown problem of American children being bought and sold by American men. 83% of confirmed sex trafficking victims are citizens of the United States.

So what can you do? Most of you don’t own a television network. You don’t have that kind of reach. Edmund Burke said,

There has never been another time in history when the average person has had as grand a reach or influence as they do today. With the plethora of social media outlets that exists, you can share your thoughts and ideas with more people than you would ever have a face to face conversation with and you can do it in seconds.

No one can fight this issue alone, but if all of us will do something, we can make a difference. Do your part. Get involved. Refuse to look the other way. Raise your voice for hope.