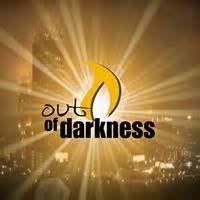 It’s Front Line Friday and I’d like to introduce you to Jeff Shaw, the founder of Out of Darkness. Their mission is:

to reach, rescue and restore all victims of commercial sexual exploitation, so that the glory of God may be known.”

I first met Jeff in 2011, when Out of Darkness was an idea. Since then, he has established Out of Darkness and it has become a beacon of hope for victims of sex trafficking in the state of Georgia, as well as others outside out Georgia who contact them.

Jeff has a passion for Jesus and to see those held in captivity find freedom, and it’s contagious. You can’t be around him for long before you, too, want to join the fight. He was eager to talk about his organization and the issue of commercial sexual exploitation.

1. When did you first learn about the issue of sex trafficking in America?

Like many others, I saw the film Taken. It was shocking to see, but I wasn’t jolted to action until I read Not for Sale by David Batstone. As I read the stories of individuals who had been exploited around the world and the people in their communities who had stood up to do something about it, I was overwhelmed. I cried out to God and asked Him what He would have me do, and the word that burned in my heart was rescue for those crying out for help in my very own city, Atlanta.

2. What did you do to further educate yourself on the issue?

When I was initially getting started, I met with Mary Frances Bowley from Wellspring Living, Pattie Harrelson from Not For Sale Georgia, Maja Hasic from Tapestri, Amy Walters at Street Grace, Patrick Palmer at Atlanta Dream Center, Courtney Dow at NightLight Atlanta, Dale Alton from Georgia Care Connection, Jennifer Swain at YouthSpark, and a handful of survivors who were working within the movement. I attended a justice conference that I believe was hosted at a local university, and a one-day training put on by Rachel Lloyd from GEMS.

2. How did you get involved in the fight?

I volunteered with Wellspring Living, Not For Sale Georgia, and NightLight Atlanta. I also participated in CSEC Task Force meetings. When I started Out of Darkness in June 2011, I was the unpaid director in my spare time. We hired a full-time director in January 2012, and then I came on full-time in December 2013.

4. Do you ever work directly with the girls/women?

I do jail visitation to women arrested from the life, drive about twice per month for our Princess Night street outreach, occasionally lead Bible studies at our safe home, occasionally provide legal assistance to survivors, and drive on some of our rescues.

5. Why is it so important for men to step into the fight against commercial sexual exploitation?

When you look in the book of Genesis, you read where God created man and woman in His image. Men and women are uniquely different. They’re both image bearers of God. If we’re trying to reflect God to survivors only through women, then they only see part of God.

There’s a place for men to be involved in the fight too. We make sure our men are trained, we do background checks and then I personally interview each one. They can serve as drivers for the rescue teams and Princess Night, they can partner with a female for jail ministry, and they can help educate the public on the issue as part of our speaker’s bureau.

6.  What is the hardest part of what you do?

The hardest thing about this work for me is not personally feeling like a failure when the people we are serving hit obstacles in life. Whenever something doesn’t go as planned, or some harm befalls a precious lady we were trying to help, it’s hard not to question and second guess what you might have been able to do differently. It is good to always be striving for growth and excellence, but ultimately, we have to understand that outcomes rest in God’s hands alone.

7.  What is the greatest blessing for you in this work?

Without a doubt, it’s seeing the work of freedom, healing, and restoration that the Lord does in the lives of those who are so precious to Him. It is mind-boggling that while He doesn’t need us, He invites us to be a part!

8. What do you feel is the weak link in this fight?

Employment opportunities for survivors. So many women go into a program, get equipped for the real world, experience a measure of healing, but then cannot find meaningful employment. This is probably one of the greatest reasons that relapse happens.

9. What role, if any, do you see pornography playing in the fight?

Oh my…where to start! Pornography is often used to condition victims by demonstrating to them what is expected of them, and how they are to act to make the “customer” believe that what is happening is enjoyable. On the other end, pornography conditions the minds of men to view women as commodities for the gratification of their sexual desires. It teaches boys from a very young age that sex does not mean intimacy, that their sexual desires can and should be gratified on demand, and that women exist to fulfill the sexual desires of men. It also teaches discontentment. Rather than prolonged and committed sexual intimacy with one person in the context of relationship, the pornography consumer can look for whatever is wanted whenever it is wanted. It teaches that one woman is not really enough, and a real woman is not really enough, creating unrealistic expectations that poison real relationships.

10. If you could share only one thing with readers about the fight, what would it be?

Commercial sexual exploitation is a life and death issue. Men, women, and children are dying around us, and the majority of the population is still disengaged. I wish we cared just a little less about our perfectly kept lawns and Sunday football games, and a lot more about the brutal oppression happening all around us! If everyone did something, no matter how small, the impact would be profound!

11. If you could address an auditorium full of teenagers about this issue, what would you tell them?

You are worth more than your bodies and your sexuality. The world is screaming at you through movies, TV, advertising, and music about where your value lies. Know that you were created with a purpose, and that you have a unique personality, gifts, and talents that deserve to be discovered and celebrated!

As you can see, Jeff Shaw is passionate about those held in bondage finding freedom. His faith in Jesus Christ is the fuel to that fire. To learn more about Out of Darkness, go here. Most of the front line organizations, like Out of Darkness, are privately funded. There is always a need for volunteers and financial support. If you would like to give to Out of Darkness, you can do so here.