Is somebody watching you? 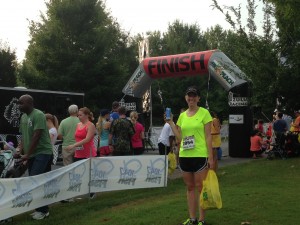 Have you ever felt like someone was watching you? It may be more true than you think.

About a year and a half ago a friend of mine, Kristin McLendon, ran a half marathon.  She started running to get in shape after giving birth to her son. I witnessed the entire transformation and was thrilled for her when she completed her goal, the half marathon.

A seed was planted. I had absolutely no desire to run a half marathon, but I did have a desire to get physically fit.

The May before my son left to study abroad, he and I went for a long walk. Because he’s a runner, he asked if I ever considered taking up running. One thing led to another and in true Sam fashion, he had turned our walk into a jog. We agreed to train all summer, which would require nothing extra from him, and run a 5K when he came home in August. And so the routine of waking up, stretching and putting on my running shoes began.

When Sam returned home in August, he informed me he wouldn’t be able to do the race we had talked about because of school. Can I just tell you that the thought of strangling him did enter my mind. After all, I’d tortured myself for three months because of his crazy idea. It was then I realized I was not going to allow this to stop me. I was going to run the 5K. My husband, Mark, not wanting me to do it alone, began training to run it with me. Where I had three months, he had three weeks.

Race day came and we did it. We ran the 5K. It wasn’t easy, but I crossed the finish line, and so did my precious husband. Afterwards, we decided it we should continue running. We ran one 5K a month until I got injured and even then, Mark continued running. I slowly worked my way back after a six month injury and I’m running again.

Just this past weekend, my daughter called me from college. She was so excited and wanted to share the good news. She had run 2 miles without stopping. She had been going to the gym 3-4 times a week working out and running until she worked up to two miles. She said she wants to get to where she can easily run a 5K, then have our whole family run it together.

Now I’m pretty certain Kristin has no idea of the impact she’s had on my family [that is until she reads this blog post]. It just goes to prove that you never know when someone is watching you and the influence you may have in their lives. Colossians 3:17 says,

And whatever you do whether in word or deed, do it all in the name of the Lord Jesus, giving thanks to God the Father through Him.”

Kristin wasn’t running so my family would get physically fit and start running 5Ks around Atlanta. She started running because she wanted to get fit and run a half marathon. Yet, her actions had a strong impact on my family for a two year period.

Now everyone isn’t a runner. Trust me, I get it. But whatever you do, realize someone may be watching you and you just might influence them.

When I began learning all I could about sex trafficking in America, I started telling my friends and family what I learned. I know. I shared about different organizations and ways to volunteer and before I knew it, about a dozen of my friends were volunteering for several of the front line organizations. Many of them have encouraged other friends of theirs to step into the fight too.

Your life may be the only Bible someone ever reads. Make it a good read.”

Who is watching you? What kind of an influence are you having in their lives?